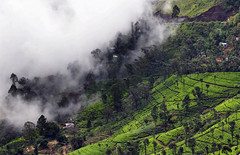 It is time to get rid of the age-old federal structures, such as the provincial councils in Sri Lanka, to consolidate fiscal positions, argues Jayasri Priyalal.
Plantation economy and the British East India Company were the two iconic economic models of the colonial British Empire. The East India Company was something similar to current giant multinational corporations, those who are economically and politically powerful than many nation states where ever they operated. Her Majesty’s Government in Britain then had completely delegated the administration of the colonies to East India Company until its collapse in 1857. Hence; one can interpret East India Company as a state-owned company as well.

As usual, they were only concerned with profits, luxury living plundered wealth from the rulers in the countries they were colonizing. East India Company [EIC] engaged in commerce in all aspects, levied taxes on the subjects and did not pay taxes to her majesties government, but profit sharing was the key understanding. By this way, EIC generated enough wealth for the commonwealth. Finally, when the East India Company went bankrupt the British taxpayers had to rescue them. The readers may be able to sense the current trends taking shape in the global economy as the saying goes; history repeats. The other question that needs an answer is whose wealth is considered commonwealth?

It is worth mentioning that tea was invented by Chinese as a beverage with a natural stimulant but commercialized by British. As there was a huge demand for tea in Britain, and to buy tea from China they had to spend silver coins. The other valuable Chinese inventions are silk, gunpowder, mercury, the navigational compass, porcelain, paper and block printing technology. In the name of free trade the British Empire wage the opium war to sell opium to the Chinese as they saw huge opportunity to make profits by growing opium in India and selling it to China and buying teas from the revenues of opium. Chinese emperor’s (Qing Dynasty) far-sighted vision enabled him to enter into a long-term lease to give Hong Kong Island to British to save the Chinese population from opium addiction and death.

Planting people to promote Victorian culture – values of English language, Christianity – civil services in alignment with a specific model to run the colonial administration have helped the subjects in colonies to achieve a better quality of life, getting integrated with the colonial commerce. Although the EIC was keen on making profits, there were many kind hearted white Europeans who shared their lives in the colonies with social concerns.

Some of them did extraordinary things for benefit of mankind standing out of imperialistic goals – education, health care, fighting for independence, elimination of poverty etc. Many of the historical artifacts in the colonies were unearthed by the British civil servants, and they taught how to preserve them for the future. If not for them; this writer would not be able to put these thoughts across through print media in a universal language; English.

Coffee, opium, cane sugar, tea, tobacco were the cash crops those were planted in entire British colonies clearing the rain forests and all arable land. The best classification on these commodities one could give is; they are all addictive. Meaning once you get the habit of consuming them, there will be a steady demand growth. Ideal commodities to generate tax revenues while exporting and importing.

Administration and the fiscal challenges in India for the colonial administration was a huge task. All the revenues generated to manage the economy in India was insufficient, the imperial administration introduced the tax on the other addictive; SALT. That was the beginning of the end of British Empire. Indian independence movement was triggered on the salt tax. Mahatma Gandhi’s historic salt march in Gujarat inspired the freedom fight in India. He cleverly rubbed a pinch of salt on the pestered colonial wound.

EIC was operating from its HQ in Calcutta, yet in Ceylon, (now Sri Lanka) they started the coffee and tea plantations to complement the spices and other commodities where EIC had the sole monopoly to trade.

Ceylon tea packed in boxes infused the American independence struggle in Boston as freedom fighters refused to pay taxes on tea imposed by the rulers in Britan. Thanks for coffee and tea; addiction towards hard liquor and beer declined in cooler climates in Europe and North America. Coffee shops restaurants became popular and they became centers for opinion making as well.

Scotts man James Taylor is known as the first planter who planted tea in Ceylon. I wonder whether he was a teetotaler. If not Scotch Whiskey too would have come along with him. Except for Tea and Coffee; the social costs towards maintaining the healthy citizenry from preventable diseases due to over usage of the addictive includes refined wheat flour. If one does a cost-benefit analysis, I am sure the tax generated through this form is not worth.

The colonial masters planted crops and people to institutionalized Victorian culture. But in the post-colonial era in Sri Lanka, some uncivilized people’s representatives in the name of devolution of power uprooted everything in value to add economic value to the pockets of few, by destroying all social values. In the name of demons crazy, these guys have been empowered with devolved mussel power instead of; the political power at the center. Should Sri Lankans support an election system, where criminals get elected to high positions? These provincial and local government positions are the seed beds for budding politicians aiming national level positions confused between value and values. Hence they can be labeled as uprooters.

The question before the citizens who are concerned with the common good of Sri Lanka, should continue with the current parallel administration system packed with provincial councils contributing to a colossal waste of money? At a time state is grappling with an acute financial deficit. Under the British administration in Sri Lanka (then Ceylon) the districts were divided into the areas where the plantations were operating with a view to collect the revenues for the state. Each district was headed by a District Revenue Officer (DRO). It is reported that the boundaries of each district were marked counting on the distance the government agent could ride on horseback from his bungalow during the daylight. So in hilly areas covering tea plantations in Ceylon the area of the district is comparatively smaller than the areas in the dry zone, where there were fewer plantations. The new provincial administration of the island nation introduced in 1987 follows the same boundary lines set by the colonial masters. The difference is there are Provincial Chief Ministers elected by the people not focused on increasing state revenue, but only to spend the money allotted by the central government.

When the patient is suffering from the terminal illness and bleeding; better to end the life soon, rather than nursing for some time and kill later. Provincial Councils in Sri Lanka have reached that stage. It is time to get rid of the age-old federal structures, such as the provincial councils in Sri Lanka to consolidate fiscal positions. And in this era of digitalization, Internet of Things is providing enough space to institutionalize participatory democracy cost effectively versus the representative democracies.
Tags: india, sri lanka