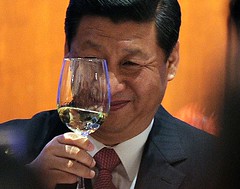 Why Xi's China is in Jeopardy

George Magnus's recent book "Red Flags: Why Xi's China is in Jeopardy" highlights four "traps" which put the Chinese economy in jeopardy, writes John West.
In the eyes of some, after four decades of rapid economic growth, the Chinese economy is unstoppable, and even when it encounters problems, the wisdom and power of the Chinese Communist Party will pull it through.

But not so writes long-time China watcher, George Magnus, who argues persuasively that China faces four critical traps -- a debt trap, a Renminbi trap, a demographic (ageing) trap, and a middle-income trap.

For all the Chinese Communist Party’s reputed brilliance, it has got China mired in enormous debt, like the much-maligned West did over a decade ago writes Magnus. China has seen a rapid tripling in total domestic debt to about 300 per cent of GDP -- notably for debt of state-owned enterprises, local governments, and more recently for citizens. The Chinese government is keen to deleverage its debt. But this is difficult because it is also very keen to maintain economic growth, which it is fuelling with credit expansion.

China’s debt problems lead us straight into the Renminbi exchange rate trap. The government is keen to maintain a stable exchange rate, but as Magnus argues the enormous liquidity in the Chinese financial system will lead to pressures to devalue the exchange rate. The government is also keen for the Renminbi to play a more important role in international financial system, but this seems unrealistic when it maintains strong controls on capital account transactions.

Magnus notes that China has the world’s fastest aging population which is the cause of the demographic (ageing) trap. China’s declining working age population is a drag on the economy, and the increasing share of seniors in the population is very costly for its public finances. In contrast to Japan and Western countries, China is growing old before it is rich.

China’s challenges are neither insuperable nor unique, according to Magnus. But he is concerned that the changes in Chinese governance since Xi assumed the nation’s leadership in 2012 are not compatible with overcoming these challenges and achieving his ambitious goals for economy.

Under Xi’s watch, many reforms have been announced, but there has been little by way of implementation. The Chinese leadership recognises problems, but cannot bring themselves to addressing them because it could threaten the role of party. They want to keep the Party supreme, but reform could threaten that primacy, especially if the inefficient state-owned enterprises are reformed.

Magnus is very critical of Xi’s renewed emphasis on authoritarianism, control, ideology, Marxism and repression. The Chinese Communist Party has been called a “controlocracy”. It is imposing barriers to dissent, civil society, foreign argument, and foreign ideas. This “great leap backwards” has echos of China under Mao.

This may attractive to some. But centralised dictatorships don’t always get everything right. And when things go wrong, blame falls on dictator, which can lead to political instability. Magnus argues that there is already evidence of some disquiet with Xi in the top ranks of the Communist Party. China’s governance under Xi is more brittle than they would have us believe. There is potential for political and policy instability.

Looking ahead, Magnus is rather pessimistic. China may have been a high growth economy, but it has slowed down, and it is likely growing at around 5 per cent, not the 6.5 per cent recorded in its dodgy statistics. And in the coming years, Magnus sees China’s growth slowing to around 3 per cent.

Many China optimists have China’s total GDP catching up to the US around 2023-25. But if a combination of Magnus’s predicted exchange rate devaluation and slow growth transpire, China would remain well behind the US even through to 2030.

Magnus’s book joins a growing chorus of China critics, and is a very useful addition to this literature. The historical background in the early chapters provide very excellent information for newcomers to this subject.

It is however important to recognise that the opacity of the Chinese system means that you can never be really sure what is happening in the economy or politics. For example, China’s much-vaunted large private enterprises are very often closely connected with the state. Some have state financing hidden behind them in corporate labyrinths. Further, according to a 2018 national intelligence law all Chinese companies (and citizens) are obliged to help the government in national intelligence gathering and dissemination. And every Chinese company with at least 3 Party members must have a Party structure as part of the corporate management.

- Red Flags: Why Xi's China Is in Jeopardy by George Magnus