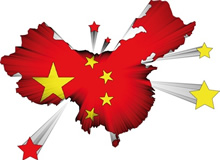 China's reform is in a real bind, and what's more, China has bad relations with virtually all of its neighbors. Where will this head?
The need for China to rebalance its growth away from exports towards domestic demand has been at the top of agenda for a few years now. With Europe, China's biggest export destination, mired in financial crisis, the need for rebalancing is becoming ever more urgent.

The Chinese government has been responding by fiscal stimulus and monetary easing. But more fundamental changes are required, especially since the economy may weaken further.

China needs to get more money into the pockets of its citizens, whose share of national income has been declining for many years now, and who are saving to cover future health and retirement costs, as the country's population undergoes rapid ageing.

Improving the spending power of Chinese citizens could be boosted by improved social welfare coverage, tax cuts and salary rises. But this would necessarily entail cutting back on the great benefits that state-owned enterprises (SOEs) enjoy -- benefits like virtual exemption from paying taxes and dividends, privileged access to bank finance, and artificially low prices for their land, energy and other inputs.

The case for reducing the SOEs' benefits is strong. But the management leaders of these SOEs are generally members of the Chinese Communist Party, whose political connections mean that it is difficult to touch their financial privileges -- all the moreso given the difficult and fragile consensus-building in the Party.

The Chinese Communist Party is now made up of factions like the princelings (the children and grandchildren of prominent members of China’s Communist Party), and the Communist Youth Party League. And there are also major policy differences between left and right wing groups. The leadership and other changes underway require brokering and consensus-building betwen these groups, which stifles the capacity to make important changes, such as to SOEs, through strong leadership.

In other words, China's economic reform process is being increasingly blocked by the country's many political interest groups.

Political reform itself is also on the agenda. Even without democratization, there are growing calls for more accountability, transparency and less corruption. The Communist Party knows this, but it is not clear that it is capable of action. In short, there is much more uncertainty than ever before.

Notwithstanding its complex domestic economic (and political) challenges, China has in fact been much more effective in the past at managing the domestic economy than managing its international relations. In this context, China's relationships with its neighbors are increasingly problematic.

There has been much media attention on China's squabbles with the Philippines and Vietnam in the South China Sea. Last week, China's President HU Jintao was greeted with massive protests in Hong Kong. The Japanese/Chinese incident in 2010 over the Senkaku islands is still reverberating, with Chinese boats recently entering into Japanese territorial waters.

Russia feels nervous about its massive open border with China. Burma has made a decisive switch away from China towards the West and ASEAN recent over the past year or so. And even North Korea has been irritating China with its unpredictable behaviour.

There have always been tensions with India, and more recently with the "Stans". And Ken Lieberthal and Wang Jisi from Brookings have recently written of the US-China "strategic distrust".

Amidst all of this, China's blogosphere is becoming ever more active, with Western embassies, notably by the US, playing a leading role. Chinese youth are only too vividly aware of the sharp differences between Western and Chinese political culture.

In conclusion, China is far from being in a steady state -- notwithstanding its official view that the global financial and European sovereign debt crises represent moral and political victories of China's economic and political model.