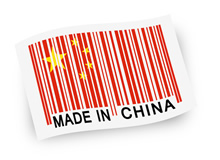 The Chinese central bank has devalued the RMB by 3% since end-2013, reversing the trend of the previous years (China does not have a freely floating exchange rate, as do most advanced economies). The RMB had appreciated by over 30% from 2005 to end-2013, and taking account of inflation, the real appreciation was a lot more. An appreciating currency is the normal tendency for a rapidly developing economy with rising productivity, which allows consumers to benefit from lower priced imports.

The US Treasury is up in arms over this devaluation, which it calls "unprecedented". Treasury is worried about the impact on US export competitiveness, especially given the fragility of the US economic recovery.

The Chinese may have devalued the RMB in part to wrong-foot currency traders for whom the previous appreciation trend was a one-way bet, and was pumping up hot capital flows into China. But it seems more than likely that China is also worried about its exports and fragile economy, especially its shaky financial sector.

Whichever way, this devaluation move is also a backward step in China's challenging program of rebalancing its economy. Postponing medium term reform imperatives because of the current economic weakness will prove costly, as demonstrated by the case of Japan.

An undervalued RMB exchange rate has been one of the key elements of China's export-driven growth strategy these past few decades as it makes its exports cheaper on international markets. Some still debate whether the exchange rate is really undervalued, and to what extent.

But an immense $4 trillion of foreign exchange reserves have been accumulated by intervening in foreign exchange markets to hold down the RMB. This is clear evidence of manipulation of the RMB exchange rate. Even in the first three months of this year, with a falling RMB, China has continued to buy foreign exchange, some $129 billion, again revealing the hand of the central bank in pushing down the RMB.

The exchange rate has not, however, been the only instrument to promote export-oriented growth, and in fact, to bias growth in favor of exports. Many incentives have been provided to attract foreign investors, who still account for close to 60% of China's exports. These incentives include tax breaks, import duty exemptions, access to cheap land and other resources, and light labor and environmental regulations in special economic zones.

This policy has enabled China to become the world's second most important destination for foreign direct investment (FDI), with a current stock over $2 trillion. Chinese companies, especially state-owned enterprises, have also received many incentives, especially through virtual exemptions from taxation and dividend payments.

China's export-oriented growth policy has been very successful. China has become the world's biggest exporting nation. And the FDI which has driven these exports, has been very important source of technology and knowledge transfer, especially for Chinese workers in foreign investment enterprises, as well as Chinese supplier enterprises.

Chinese export companies have also greatly improved their manufacturing capabilities and management skills through the discipline of meeting product-quality standards of international markets. This is very often facilitated by foreign purchasers providing detailed product specifications, and even teaching Chinese companies how to manufacture for their requirements. Export revenues are also beneficial in that they finance imports of technology, capital goods, and natural resources.

Despite the clear benefits of this export-oriented strategy for industrial upgrading and climbing the global value chain, there have also been costs.

Most analysis confirms that the undervalued exchange rate and other incentives have contributed to China's enormous current account surplus and the accumulation of foreign exchange reserves. The current account surplus has been irritant in international relations, especially with the US. According to one estimate the US lost 2.7 million jobs between 2001 and 2011 because of China's currency manipulation.

More importantly for China, as the US and other Western countries have moved to a post-crisis lower growth path, the world economy can no longer absorb as much exports from China and other emerging market as in the past. In other words, growth must be rebalanced away from exports towards domestic consumption.

There are other factors driving the rebalancing imperative. China earns very low interest on its reserves (the majority are in US Treasury bills), meaning that they are a bad investment. And if the exchange rate were higher and current account surplus lower, Chinese citizens could afford to consume more imports, thereby helping to address the problem of China's immense income inequality. There would also be less inflationary pressures in China's domestic economy.

Another consequence of biasing growth in favor of exports has been that China's domestic services sector has developed much less than the export sector. China's service sector productivity is low, and services are much less competitive on global markets.

Also large state-owned enterprises have received favoured treatment at the expense of small and medium enterprises, and start-ups. This is now sapping the potential for entrepreneurship to become a new driver of growth in China.

In conclusion, it is high time for China to stop manipulating the RMB in a downwards direction, and to move to a more market-oriented exchange rate. This could mean continued management of the exchange rate -- rather than free floating -- but with no net accumulation of foreign exchange reserves.

But the Chinese government is attempting to engineer a rebalancing of its economy, while at the same time its overall rate of growth is slowing down. And it is very keen to avoid the social and political consequences of a sharp slowdown in growth and a rise in unemployment.

Thus, as the Chinese government gets nervous about the slowing of growth, its knee-jerk reaction is to weaken the exchange rate to help exports, thereby postponing the rebalancing imperative. In this, it is pushed by many vested interests, notably exporters, who are lobbying against a higher exchange rate. Thus, many market analysts are now expressing concerns that the government may now put off other reforms because of worries about the growth slowdown.

The Chinese government has been talking for a number of years about the need rebalance its economy. But according to analysis by Xing and Pradhananga, the Chinese economy remains highly dependent on exports and FDI. Indeed, since 2008, the Chinese government has implemented a number of measures to support exports. And little progress has been made in increasing domestic consumption -- Chinese household consumption has fallen from over 45% of GDP in the 1990s to 33% in 2010.

The Chinese economy and its rebalancing agenda stand at an important crossroads. The government is trying to engineer a rebalancing of the economy away from exports and towards domestic consumption as its main driver, while stopping economic growth from falling too much.

The temptation to postpone rebalancing for the sake of holding growth up will only store up massive problems for the future. China only needs to look at the case of Japan which has postponed necessary economic adjustments for two decades, and is now sitting on a stagnant economy with public debt to the tune of 200% of GDP.

- Report to Congress on International Economic and Exchange Rate Policies. U.S. Department of the Treasury, Office of International Affairs. April 15, 2014.

- Why is China so attractive for FDI? The role of exchange rates. Yuqing Xing. International University of Japan.

- The rise and fall of export-led growth by Thomas I. Palley. New American Foundation. July 2011.