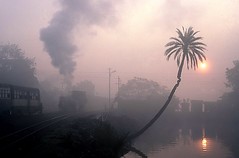 In the global media, China’s pollution is the cautionary tale of choice: the first-ever pollution ‘red alert’ came into effect this week in Beijing leading to the shutting of schools and outdoor construction. Earlier this year, a study revealed that over 4,000 Chinese people die each day from health complications related to air pollution.

India faces a crisis of worse proportion. In June, the WHO declared Delhi’s air quality the worst in the world. Delhi’s air pollution over the last one week has become one-and-a-half times worse than Beijing’s. And yet, Delhi’s citizenry seem more concerned about the perils of carpooling and rationing vehicle usage than calamitous levels of air pollution.

By some estimates, India’s pollution accounts for 1.3 million deaths a year. Cases of respiratory diseases have spiked 30% since 2010, and Delhi may soon lead the world in premature deaths from air pollution. Poor air quality has also been linked with rapidly declining crop yields. In 2013, the impact of pollution on India’s economy was an estimated $80 billion, 5.7% of GDP.

It is likely to have risen since then. Pollution is a problem that spans policy arenas. In addition to industrial activity, evolving consumer preferences are a contributing factor. In Delhi, 1,400 new vehicles crowd the streets each day, adding to a current estimate of nearly nine million. Not even nights offer a chance for the air to clear.

Delhi residents wake up to a fog of exhaust produced by 80,000 trucks on the streets between midnight and dawn for local and regional deliveries.

These trucks, contributing to 24-25% of vehicular pollution (two-wheelers contribute 18% while passenger cars 14-15%) according to an IIT-Kanpur study, are often unchecked by police or drivers for emissions controls and load limits. The benefits of cleaner fuel types are almost completely neutralised by the sheer number of vehicles on Delhi’s congested streets.

Pollution sources go beyond industry and congestion. Agricultural burning has reached crisis levels in parts of Southeast Asia. ‘Haze’, or smoke (perhaps it should be called what it is), originating in Sumatra during crop-clearing season quickly shrouds neighbours like Singapore. This trans-boundary problem is testing political patience in the region, with Indonesia offering more apologies than results.

As in Indonesia, burning is cheap and easy for Indian farmers who lack the means to adopt cleaner methods.

The byproducts of agricultural harvests, called stubble, are being burned in Punjab and Haryana at an estimated rate of 500 million tonnes each winter. Anti-burning laws are weakly enforced, and state pollution control boards appear to be negligent.

Fighting air pollution takes unwavering political will and committed implementation. There are signs that the Indian government is willing to address the issue. In 1998, the Supreme Court forced Delhi to exclusively use compressed natural gas for three-wheelers, buses and other automobiles.

The initiative improved Delhi’s air quality, but this marked the end of the progress. Since then, Delhi’s administration has developed few meaningful policies to address air pollution. There is ample evidence to support government intervention. The recent launch of an air quality index should, at the very least, provide better understanding about conditions and trends for citizens and policymakers alike.

Despite worsening pollution and indisputable evidence about its causes, manufacturers continue to push back against regulations. Both at the central and state levels, governments must decide whose interests to serve: industrialists or citizens.

The case for stricter controls is not difficult to make. There are social, environmental and economic arguments that support more aggressive pollution management. Bypass roads are not enough, least of all when they are planned but unbuilt.

For the ‘Make in India’ initiative to succeed, there must be an enabling and evidence-based policy environment that places the broader welfare of society above the expedient gains of unfettered industrial expansion.

Growth provides jobs and improves livelihoods, but it must be achieved in away that doesn’t visit irreparable damage to the environment and public health. Further, having the worst air pollution in the world is not the type of reputation that attracts FDI. Reducing pollution created by trucks, cutting down on car usage and opting for public transport aren’t easy, or even the only, options. But resisting them is asymptom of a larger state of apathy.

The writers are with the Lee Kuan Yew School of Public Policy, National University of Singapore.

This article was first published by The Economic Times, December 11, 2015.