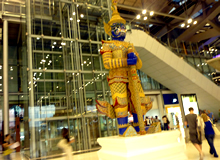 Anbumozhi reminded us that it is the jobof business everywhere in the world, Japan included, to transform inputs into outputs. In doing so, business creates many products of benefit to consumers. It has been a drving force in the rise in life expectancy these past two centuries.

By the same token, business also uses scarce resources and pollutes the environment. And the impact of industrialization on the environment has been horrendous these past 150 years.

During the first decades after World War 2, Japan achieved very rapid economic growth, especially in Osaka, the country's industrial and business capital (Tokyo is Japan's political capital). This had dramatic adverse effects on the environment in the 1960s and 1970s. But it was also the trigger for new, socially responsible environmental approaches by Japanese business.

Thus a modern wave of corporate social responsibility (CSR) was born in Japan. As Anbumozhi argued, business exists in society, and cannot ignore society. So business was responsive to societal pressures from non-profit organizations, the media and community groups to clean up their act.

Improving eco-efficiency also resulted in cost savings for companies through improved energy efficiency, waste elimination and pollution abatement. CSR was good business. And the companies became involved in reputation competition with each other. Corporate peer pressure generated a virtuous circle.

This meant that companies were "going beyond compliance". In other words, they were doing more than they needed to in terms of complying with enviromental regulations.

Anbumozhi explained that Japanese business is characterized by "supply chains", which complicate CSR management. For example, Toyota's Japanese factories only produce 40% of their vehicles. The remaining 60% are components produced by small and medium enterprises (SMEs make up 99% of Japanese enterprises, and are the backbone of the Japanese economy). So large Japanese enterprises like Toyota, Nissan and Sony "mentor" SMEs as a means of improving their environmental performance.

A growing number Japanese companies now publish environmental/sustainability reports which provide emission and pollution information to consumers, shareholders and the community, as well as regulators. Japan has a much higher number of sustainability reports registered with the Global Reporting Initiative than any other Asian country.

Japan is also way ahead of other Asian countries in terms of environmental certification under the International Standards Organization (ISO). A good number of Japanese companies are signatories to the United Nations Global Compact for CSR. And Japan leads Asia for environmental labelling programs.

However, for CSR to become a more powerful tool for sustainable development, more information needs to be disseminated to consumers. They must understand the importance of sometimes paying more for goods that have been produced "responsibly". Governments can also play a role in subsidizing CSR programs.

Is this all too good to be true?

We must recognize that many companies see CSR policies as a means of improving their brand and image in the eyes of consumers, that is a business competitiveness strategy. They are not all true believers. CSR policies and practices can also be an effective tactic for forestalling the implementation of regulations.

"Greenwashing" is also a trend, meaning a form of spin in which green PR or green marketing is deceptively used to promote the perception that an organization's products, aims and/or policies are environmentally friendly. And by outsourcing many manufacturing activities to emerging Asian countries like China and Thailand, Japan can enjoy lower environmental standards and requirements in these countries.

All that said, it is abundantly clear that in many sectors, especially automobiles, Japanese companies are leaders in developing environmentally friendly technologies and promoting CSR.