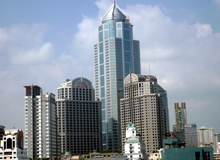 Over the past several decades, Hong Kong's water supply and wastewater management practices have been on an unsustainable path. Poor planning, absence of sustained interest from its top policymakers, an uninformed public, lack of regular media scrutiny and a series of poor policy interventions have ensured that, today, it lags behind nearly all cities of similar levels of economic development in its management of water.

Hong Kong is a net water importer. Currently, 70-80 per cent is imported from Guangdong's Dongjiang through multiple agreements. The Audit Commission reported in 1999 that the planners had so badly overestimated city water requirements in the 1989 agreement that some 716 million cubic metres of water literally went down the drain, which cost taxpayers, between 1994 and 1998, HK$1.7 billion.

Even after this sad performance, the next agreement was even worse. The requirement was again another overestimate. Consequently, between 2006 and 2012, the city had to pay for seven years of water imports but in reality used only about six years of water. This overestimation cost the taxpayers another HK$2.8 billion.

As an adviser to 19 governments, I am not aware of a single city anywhere in the world which has consistently overestimated water requirements so badly for over two decades. Not only has overestimation been a serious problem, but also no serious policy measures were taken to manage domestic and industrial water demands. At present, average water use in Hong Kong is about 220 litres per capita per day, a figure that is higher than in 2003.

This is bad management since in nearly all similar cities of the world, the usage trends are generally declining because of better management practices and increasing awareness of the people that water is a scarce resource.

Accordingly, inhabitants of cities like Hamburg and Barcelona use about half that of an average Hongkonger. In Singapore, per capita water use has steadily come down in recent decades. It is now 152 litres per capita per day, which is still on the high side. An average Hongkonger uses 45 per cent more.

One of the reasons for this very high usage is because water and wastewater provisioning has been subsidised at higher levels with each passing year. The water tariff has remained the same since 1995, but costs of services have gone up steadily. This has resulted in some ridiculous situations, like the city providing private bottled water companies with highly subsidised water, which at the retail level is being sold at over 1,000 times the cost of city water.

The present pricing structure means that a round 14 per cent of Hong Kong residents do not pay for water and sewerage services. Each household now receives completely free 12 cubic metres of water every four months irrespective of their ability to pay. This is in contrast to Singapore, where its national water agency, PUB, not only completely recovers its costs but also makes a profit.

Furthermore, in Hong Kong, there have been no consistent attempts to educate the citizens on the importance of water as a strategic resource. This is again in sharp contrast to Singapore, where the population is regularly made aware of the value of water. The interactive permanent exhibitions of wastewater treatment and water management at its NEWater Visitor Centre and Marina Barrage have become major tourist destinations.

When compared to other Asian cities of similar levels of per capita gross domestic product, like Singapore, Tokyo or Osaka, urban water management in Hong Kong comes out very poorly. But even when compared to some cities in developing countries, like Cambodia's Phnom Penh, Hong Kong does not fare well.

For the past 15 years, the Phnom Penh Water Supply Authority has outclassed Hong Kong. Like in Hong Kong, Phnom Penh residents receive clean water which can be drunk straight from the tap. Both the poor and the rich pay for water at affordable prices, and no one receives free water, as in Hong Kong.

For example, Phnom Penh's bill collection ratio is almost 100 per cent, and unaccounted-for losses from the water system are about 6.5 per cent, compared to about 17 per cent in Hong Kong.

The question the Hong Kong public and policymakers need to ask and answer is: how did a third world city like Phnom Penh, which has limited technical and administrative capacities, no private sector to speak of, inadequate educational and management facilities and poor governance practices, manage to leapfrog a world-class city like Hong Kong so thoroughly in little over a decade?

Urban water management is not rocket science. There is no reason why any city of more than 200,000 people cannot have a good water system. It is high time for Hong Kong to do some serious soul-searching and find solutions which can radically improve its present urban water system.

Asit K. Biswas is the Distinguished Visiting Professor at Lee Kuan Yew School of Public Policy, National University of Singapore. An adviser to 19 countries, he received the Stockholm Water Prize, equivalent to a Nobel Prize in the area of water, in 2006.