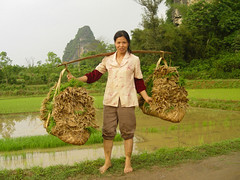 Policies for food security in China have called for basic self sufficiency in grains and absolute security in staple grains such as wheat and rice. These policies have had, and will continue to have, significant implications on the environment, mostly in terms of land and water, both within China and also on the countries from which such products are sourced. These are United States, Brazil, Australia, Canada, New Zealand, and Argentina.

To respond to its internal growing food needs, China has become the largest trader of agricultural products globally, with imports totaling $1.9 billion in 2013. Internal demands have increased for wheat and soybean oil; cotton and wool fibers as raw material for textile manufacturing; meat and dairy products, etc. Soybeans, other oilseeds and fats and oils represent nearly half of the country’s agricultural import value and are expected to increase significantly in the future.

According to Cofco, China’s State-owned grain trader, the country´s global farm imports would increase from 120 to 200 million tons within a decade because of changing dietary preferences of an increasingly affluent population that demands more meat and dairy products.

In China, agriculture has also had many environmental and health impacts. The excessive use of chemicals such as fertilizers and pesticides has made it a major contributor to soil and water pollution, especially due to leaching of nitrogen and phosphate. Problems can be seen in many places Groundwater levels have increased in many areas because of seepage from irrigation and drainage. This has increased soil salinity and made land less productive.

The Yangtze basin, a region of paddy production, has suffered serious problems of contamination for decades. These include severe contamination with pyrethroid, organosphosphorus and carbamate pesticides, which could be carcinogenic. In Taihu Lake, increasing levels of phosphorus due to agricultural, domestic and industrial discharges have resulted in serious eutrophication and nitrate contamination. They have seriously deteriorated quality of drinking water for over one million people. In Yellow and Huai rivers, major areas for corn, cotton, soybean and wheat production, high concentrations of products toxic to humans and wildlife have been noted such as amides and triazines pesticides.

China’s livestock, primarily pigs and cattle, but also poultry, similarly represent serious sources of pollution. Large amounts of animal wastes are polluting surface and groundwater, both accidentally and deliberately, from family, village and communal farms and feedlots. This is creating enormous health and environmental problems.

Since places with the highest agricultural pollution are also those with the highest domestic and industrial pollution the contamination is compounded. The Yangtze River is one example where a dangerous mix of pollutants continue endangering the health of the river and reducing drinking water quality due to eutrophication and presence of other toxic substances.

Food and environmental securities are key priority issues for China. However, they need to be viewed within a framework that simultaneously considers agricultural policies, management practices and environmental protection measures for land and water. In China, like in most other countries, formulation of policies that would respond to a growing wealthy and educated population demanding concurrently more protein-rich diets and also improved quality of life and cleaner environments, still need to be strengthened.

Decades of focus on economic growth has ensured hundreds of millions of Chinese have now entered middle class. Now, one of the country’s priorities has to be how to overcome decades of heady economic growth without appropriate environmental considerations that have contributed to serious environmental and health problems.

Cecilia Tortajada is a senior research fellow at the Lee Kuan Yew School of Public Policy and past President of the International Water Resources Association.

This article published was first published in the China Daily on June 4, 2015.