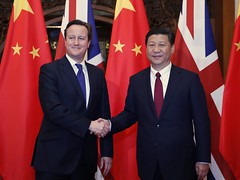 There are seven reasons why the UK is courting Beijing, writes OMFIF's David Marsh.
David Cameron, the UK prime minister, who hosts Chinese President Xi Jinping in Britain this week, has become the Cinderella of Beijing’s up-and-down relationships with the West. Very much out of favour in 2012 over his courtship of the Dalai Lama, the Tibetan spiritual leader habitually on a collision course with Beijing, Cameron has now moved up comprehensively in the friendship stakes, all part of a determined UK government bid to woo Chinese trade and investment.

In a Chinese TV interview at the end of last week, Cameron attempted to deflect complaints that Britain is kowtowing to China. ‘We see no conflict with having that very special relationship, with wanting to be a strong partner for China as the Chinese economy continues to grow and China emerges as an enormous world power.’

Yet the British approach continues to attract criticism from other countries, not least from the US, where a senior official said in March that Britain’s alacrity in declaring its participation in the China-led Asian Infrastructure Investment bank was a sign of its ‘constant accommodation’ of the Chinese leadership.

Here are seven reasons – of varying levels of importance – why the UK wishes to expand economic ties with the Chinese.

1. Britain’s future trade and investment relationships with the European Union are uncertain. The UK is the biggest trading partner of the 19 counties within economic and monetary union. Yet these links are becoming relatively less important as a result of weak economic growth on the Continent. They would be further damaged if Britain leaves the EU under the planned referendum in 2016 or 2017. China represents a useful hedge against such eventualities.

2. As China intensifies efforts to internationalise its currency, the City of London will benefit from higher trading and transaction volumes. The Beijing authorities look set to issue government debt in renminbi in London, marking out the UK as the first overseas financial centre where China opens a sovereign debt market. The British government, which has been criticised for turning a blind eye to imports of cheap Chinese steel that are costing thousands of jobs in the UK steel industry, may however be accused of valuing City financial employment higher than that in the mainly northern steel sector.

3. The green light for Chinese investment in London and across British infrastructure has positive repercussions for inward flows by other large state and private sector investment agencies, whether from Asia, Europe or North America. Some foreign sovereign funds and pension companies have been irked by changes in UK government regulations affecting investment pricing in fields like utilities and airports. Yet London’s open-door policies towards international sovereign funds go back many years before the Cameron administration.

4. Chinese multi-billion-pound investment in Britain’s next generation of nuclear power stations, which has attracted controversy on security grounds, is part of a decades-long chronicle of UK retreat from home-grown nuclear technology. China National Nuclear Corporation and China General Nuclear Power Group are expected to take minority stakes in Hinkley Point C, a nuclear plant in southwest England, with EDF, the French state-controlled utility, the main investor.

5. British intelligence officials are seeking assurances from China that Beijing’s nuclear involvement — which sets new standards in China’s relations in sensitive technology with western countries — would not give China an undue strategic hold over the UK at a time of international tension. In essence, this is a similar dilemma for the UK authorities as that already posed to the US by China’s large holdings (which it is now seeking to diminish) of US Treasury bonds.

6. Like other international central banks, the People’s Bank of China appears in recent years to have extended holdings of sterling, now the world’s third largest reserve currency, a long way behind the dollar and the euro, but ahead of the yen (out of favour in China). This reflects relatively high interest rates on UK investments and generally favourable assessment of UK economic prospects. The UK Treasury has no overt policy on sterling’s use as a reserve currency, but officials probably regard Chinese interest in acquiring sterling as generally a positive development.

7. Behind the UK’s courtship of China – and willingness to sidestep complaints that it is ignoring China’s blemishes in human rights – may lie a UK exercise in historical atonement. Many years of criticism by Chinese officials and scholars that Britain’s imperial trade practices in the 19th century turned millions of Chinese citizens into opium addicts – and led to two wars – may be at last producing an effect, by lowering British propensity to intervene in what the Chinese consider their internal affairs.