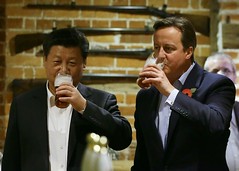 Julian Lindley-French on Britain's Nuclear Nanking: Kowtowing to China.
“HER MAJESTY the Queen of the United Kingdom of Great Britain and Ireland, and His Majesty the Emperor of China, being desirous of putting an end to the misunderstandings and consequent hostilities which have arisen between the two countries, have resolved to conclude a Treaty for that purpose . . .” The Treaty of Nanking, August 1842

Kowtow: Chinese custom of touching ground with forehead as a sign of worship or absolute submission. (Oxford English Dictionary). There will be senior Mandarins in Beijing smiling this morning at the satisfying irony of what is in effect the nuclear equivalent of the 1842 Treaty of Nanking. On 29 August 1842, at the end of the First Opium War, Britain imposed the Treaty of Nanking on the Chinese Emperor under the then mighty guns of the Royal Navy. It was the first of the so-called ‘unequal treaties’. This week Britain will touch the ground with its forehead to seek Chinese money and technology at outrageously advantageous terms to Beijing to fund three nuclear energy plants. It is nothing short of a nuclear Nanking, and pay-back for China’s past humiliation at British hands. In a desperate bid to close Britain’s looming energy gap is Britain about to make a dangerous choice between America and China?

Naturally, no mention will be made of Nanking as President Xi Jinping arrives today in Britain to begin a four day state visit which Beijing is heralding as the start of a “golden era” in Anglo-Chinese relations. However, even as President Xi sets foot on British soil America’s most modern fleet is on course to enter the South and East China Seas in a ‘freedom of navigation’ exercise to challenge China’s occupation of 209 islands and what looks like the construction of military bases on some of them.

Since the early 1970s Britain has had a foreign, security and defence policy that is at best a contradiction; the former focused on the EU, with the latter focused on the United States. Amongst friends such a contradiction could for the most part be massaged away by Whitehall’s many political masseurs. However, British Chancellor of the Exchequer (finance minister) and true architect of government policy George Osborne, wants to take the art of strategic massage into even more intimate spaces by in effect giving much of Britain’s civil nuclear energy policy to China.

In spite of warnings from Britain’s security services, and in spite of a series of announcements that will be made this week about ‘guarantees’ to UK-Chinese cyber ‘relations’, the deal is replete with risk to Britain and indeed its allies. Indeed, not long ago I was told by a senior British military officer that Britain was under ‘daily industrial cyber-attack’ from China. Now, China is Britain's new “best friend”. Have I missed something?

The deal is as ever being driven by those masters of the short-term HM Treasury, who never seem to miss an opportunity to make the wrong strategic decision for all the wrong short-term reasons. Yes, a strong trading relationship with China is of course desirable, but not at the expense of Britain’s security and defence.

Whitehall likes to hide Britain’s supine and abject weakness at such moments with a blast of hubris. By ‘engaging’ China in such a way Britain is not selling its defence-strategic soul for energy, but rather helping to make China a responsible world citizen. To demonstrate Britain’s lofty ambitions, the official line goes, London will again raise China’s abuse of human rights.

Let me tell you how Britain ‘raises human rights’ with China. The last time David Cameron went to China there was a box marked ‘human rights’. Yes, a box. The box was given to the Chinese Foreign Ministry by the British Foreign and Commonwealth Office. During Cameron’s visit a junior British official met with the most junior of Chinese officials to ‘discuss’ human rights. By that ruse Cameron could say he had raised human rights with the Chinese. It is of course complete and utter nonsense. Indeed, it would be far better to simply admit the truth; trade with China is far more important to Britain than China’s abuse of human rights. If such supine kowtowing to dodgy, rich regimes is what future British life outside the EU will look like it almost makes me want to stay in…almost.

In for a penny, in for a pound (or is that yuan)? If the government is prepared to offer China the equivalent of a nuclear Nanking, why not go the whole nuclear hog and ask Beijing to pay for Britain’s other big nuclear project; the planned replacement of the Trident nuclear missile system and the four nuclear submarines that would carry them. At the very least Britain could ask the Chinese to lease Britain the nuclear submarines upon which the US-built missiles would be carried? Surely, the US Navy would not mind and in any case it would be good for trade.

My cynicism is well-founded. Those same smiling Mandarins will be fully aware of the impact this deal will have on London’s taut and fraught strategic relationship with Washington. It is a consequence that will not have been lost on Beijing as it seeks to isolate America from its broke European allies via the strategic application of sovereign wealth. Indeed, this nuclear Nanking will only reinforce a perception gained in Washington when Britain backed China’s Asian Investment Bank that London no longer thinks strategically. And, that Britain can no longer be relied upon as an ally in dealing with an increasingly aggressive and assertive strategic competitor.

In 1842 the Treaty of Nanking was the product of a Britain at the height of its imperial power and reflected a foreign policy crafted by Lord Palmerston that was predicated purely and simply on mercantilism – the enrichment of Britain through ‘free trade’ on British terms. Today, Britain’s leaders are still obsessed with mercantilism but see themselves as powerless. That is why George Osborne is kowtowing to the Chinese. Indeed, this nuclear Nanking has Little Britainwritten all over it!

A year after the Treaty of Nanking Hong Kong Island was given to the British in perpetuity. Therefore, it would only be fair to offer President Xi the Isle of Wight...in perpetuity. No, no, no! I was only joking London.

So, is London about to make a dangerous choice between America and China? Only time will tell but at least London should think about it.