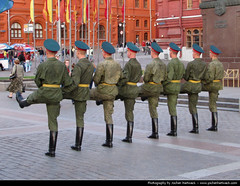 Russia Parades its Weakness, writes Professor Dr Julian Lindley-French, Vice-President at Atlantic Treaty Association.
Victory Day in Moscow takes place on May 9th each year and commemorates the day Moscow cites as the end of World War Two. This is because whilst the Western allies signed the instruments of surrender with the Nazi regime on May 8th 1945, Marshal Stalin insisted upon a separate signing ceremony for the the Soviet Union.

This is hardly surprising given the enormous sacrifice the Russian people made during the Great Patriotic War between 1941 and 1945, and their unrivalled contribution to the defeat of Nazism. Equally unsurprising is the 1945 commemorating annual military parade in Moscow’s Red Square. However, far from demonstrating Russia’s might when set against the fundamentals of Russia’s broken economy the parade revealed dangerous weakness.

This year as ever the parade that rumbled, roared and marched its way across Red Square was impressive and one cannot blame the average Russian for a sense of pride. In addition to 10,000 troops, 135 military vehicles, and some 355 military aircraft there was also new military equipment on show. These included next generation Su-35s fighters, Mi-28 and Ka-52 helicopters, as well as new S-400 Triumf air defence units, and a new IL-76 transport aircraft. Interestingly, there was no sign of the treaty-busting Iskander Kalibr intermediate-range cruise missile.

However, the reality is that whilst President Putin may have created a strong security state, Russia is far from being a powerful country. Indeed, if Russia continues spending the amount it currently spends on security AND defence unless the oil price rises sharply above the $47 per barrel needed to fund Russian public expenditure, the Russian economy will eventually collapse.

Or, to put it another way, in 2015 Russia’s economy was worth some $1.2 trillion, the German economy some $3.3tr, Britain’s economy some $2.8tr, and the French economy some $2.4tr. And yet with 2015 Russian military expenditure at 5% of GDP Moscow is spending just about the same on defence as a percentage of its economy as Britain and Germany combined.

Even the military front is something of a Potemkin village. The weakened Russian economy and the consequent collapse in the value of the rouble is having a profoundly negative impact on the modernisation of the Russian military which began back in 2010. Although the original aim back in 2010 was to spend some $700bn over ten years on new armed forces the collapse of the rouble means that Russia can only spend ‘some’ $300bn.

Yes, Russia gets far more out of each rouble defence-invested than, say, Britain does for each pound defence-invested. Equally, the British defence equipment investment programme of $250bn over ten years is now almost as big as the entire Russian military modernisation programme, and according to IISS the British spent $5bn more on defence in 2015 than the Russians.

Given the economic facts of Russian life it is thus bizarre that Moscow has locked itself into a campaign of what it calls non-linear warfare (what the West calls hybrid warfare) against the very European countries that provide for most of its foreign direct investment and some 70% of its trade.

Worse, that campaign shows no signs of abating. Indeed, Russia’s use of disinformation, deception, and destabilisation against its western neighbours is becoming more aggressive, and the means for its exploitation more advanced, and more expensive.

Rossiya 24 even aired a story about a major Victory Day parade in the Russian-speaking Estonian town of Sillamäe that never took place. The implication of all this seeded disinformation is clear; any Russian aggression against the Baltic States would be in support of oppressed ‘liberators’ and thus justified. What are the rest of us meant to think?

Parts of the disinformation campaign also has an eerie resemblance to the old ‘dual-track’ era back in the late 1970s when the Soviets funded protest movements across Western Europe in a failed attempt to prevent NATO from deploying missiles designed to counter their own Europe-busting SS20 nuclear systems.

On Victory Day this year marches took place in support of the “Immortals Regiment”, to honour those Russians who gave their lives fighting the Nazis. However, for the first time some of those marches took place in American and European cities. The groups who organised them seem for the most part to be youth movements with close links to Russian money. The paradox is that the more Moscow uses such tactics to give the impression of power the more it reveals instead the fundamental structural weakness with which Russia must contend.

Now, I do not want to rain on Russia’s grand parade, not least out of respect for Russia, the Russian people, and Russia’s valiant war dead whom I hold in the highest respect. However, President Putin is leading Russia down a blind alley to danger with his current policy of turning Russia into the Soviet Union-lite.

Russia’s bottom-line is this; whilst Britain spends about 7% of its GDP on security of which defence is a part, Russia is now spending some 20% of its GDP on the security state. It was precisely over-investment in the security state that eventually killed the Soviet Union, which at times consumed upwards of 40% of the entire Soviet economy. Therefore, as a policy consequence President Putin might wish to add two more ‘ds’ to his triad of disinformation, deception, and destabilisation; Western disinvestment and disengagement.

And that was the irony of this year’s Victory Day parade. It is precisely the heavy Russian metal that was marched through Red Square that is helping to kill the Russian economy. Consequently, it was not Russia’s power that was on parade on Victory Day, but Russia’s weakness. Indeed, it is Russian weakness not Russian strength which is most dangerous.