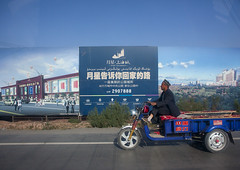 One belt, one road, and the Chinese dream

Professor Arase highlighted five main facets of the OBOR. It will develop the relatively backward western border regions of China. It will foster new export markets, including for China's excess capacity. The financing needs will be enormous, with the new Asian Infrastructure Investment Bank playing only a small role. It will support China's diplomacy with the participating countries, giving China a tremendous ability to set agendas and advance its own interests. And it will open China to the rest of the region, including Pakistan and Djibouti.

The OBOR would never become like the European Union, said Professor Arase. It is not a multilateral agreement or organisation. It is a Sinocentric “hub and spoke” arrangement of bilateral agreements between China and each of the 57 participating countries. Moreover, these are only political, not legal, agreements.

Professor Arase concluded that OBOR is a “backward looking vision of the future” which seeks to recreate an order from the past, motivated by the horrors of China’s century of humiliation. But, if successful, it would be a boon to Chinese diplomacy, which would enable China to raise its stature in the world and to create new international norms and institutions.

The US is now reassessing its relations with China observed Professor Arase. The US had hoped that China would buy into the existing international system, having benefited from it through its development these past three decades. But seems not to be the case.

In particular, China’s nationalization of the high seas in the South China Sea is a violation of the right to freedom of navigation which is inherent in the WTO-based international trading system. Moreover, by extending its sphere of influence to the East China Sea, Indian Ocean as well as the South China Sea, China will be able to determine with whom and how countries can trade.

Overall, this threatens an upheaval in the international system, from which China has benefited so much. And all that China can offer in return is the replacement of multilateralism with “hub and spoke” diplomacy through which negotiates with everyone else on an individual basis. An attempt to divide and rule the rest of the world. The most obvious evidence of this is the fracturing of ASEAN as China courts allies like Brunei, Cambodia and Laos to support its claims to the South China Sea.
Tags: china, one belt one road, silk road, xi jinping