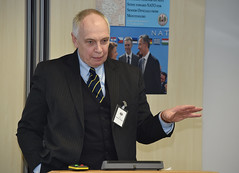 Geopolitics is a permanent power struggle between symmetry and asymmetry writes Julian Lindley-French.
There is certainly a certain symmetry in the delicious coincidence of the launch of the new EU Global Strategy and the rejection yesterday in The Hague by the UN’s Permanent Court of Arbitration of China’s feisty claim to some three million square kilometres of the South China Sea, through which some $5 trillion of trade passes every year, and under which huge oil and gas resources are believed to be oozing and bubbling invitingly away.

Whereas Globstrat is the usual blah blah that passes for ‘strategy’ in the EU, China’s quick denunciation of The Hague judgement, and de facto rejection of the United Nations Convention on the Law of the Sea (UNCLOS), suggests a twenty-first century that could be every bit as cold as the waters Beijing claims as its own. For Europeans events in the South China Sea are equally momentous and beg THE geopolitical question; are pious words ever going to be matched by real power? It is EU yawn versus Chinese brawn.

China has certainly acquired a lot of brawn of late. In 2016 China will increase its defence expenditure by 8% to around $150 billion. Paradoxically, an 8% increase in Chinese defence expenditure is the lowest such percentage increase since 1989. Between 1989 and 2015 the Chinese defence budget grew year-on-year by more than 10%. The key stat is this; in a conservative estimate CNN values the size of the US economy in 2016 at $19 trillion, with the Chinese economy worth some $12 trillion. The US will spend some 3.4% of GDP on defence in 2016, with the Chinese spending 8%. Therefore, one has only to do the ‘math’, as the Yanks say, to realise the trouble that could well lie not too far ahead.

Furthermore, whilst Chinese defence expenditure would appear to be far below 2016 US defence expenditure of $573 billion, the gap is not as wide as it appears. First, the US must spread its forces and resources across the globe; China concentrates its military power by and large on East Asia. Second, declared Chinese defence expenditure is believed to be far lower than the actual amount Beijing invests in ‘defence’, particularly in defence research and development. Third, China would appear to get more ‘yang’ for each yuan invested, than the Americans get bang for each buck. Pork barrel politics and sequestration have done terrible damage to the US military.

The EU? Lots of yawn. In 2016 EU members will spend some $200 billion. However, that expenditure is badly fractured and generates nothing like the same bang for each euro/pound etc., spent as either the Americans or the Chinese. Moreover, the British 25% of EU defence expenditure is about to quit the Union, taking with it some 40% of defence research and technology investment.

Taken together Globstrat and The Hague judgement suggest a geopolitical tipping point which could point to either peace…or war. Read the official Chinese government statement on The Hague judgement and it is uncompromising. However, read between the lines and Beijing clearly leaves some wriggle room for a negotiated settlement with Brunei, the Philippines, Malaysia, Taiwan, and Vietnam all of which contest the Chinese claim. However, if China continues to turn the series of reefs it has seized of late into military bases, and then moves to exclude the air and sea forces of other states from the South China Sea, then Beijing will be set irrevocably on a collision course with other powers, most notably the United States.

As for the EU if ‘discourse’ is not matched by force and resource then Globstrat will be yet another one of those European exercises in empty geopolitics that sooner or later collapses under the weight of the very meaningless acronyms it generates. If the EU strategy was indeed ‘global’ EU foreign and security policy ‘supremo’ Federica Mogherini would be meeting with European leaders this morning to consider the EU’s position on the South China Sea, and what support Europeans could offer the democracies in the region. There will of course be a statement, but the very idea of ‘EU action’ is absurd, which is precisely why the EU is NOT a global actor.

Globstrat will certainly spawn a lot of talk. Endless Brussels meetings of endlessly ambitious young think-tankers will now ensue in which the illuminati try endlessly to find signs of grand substance where in fact there is none. Globstrat will be minutely examined with each word parsed for signs of life in the corpse that is Europe’s ‘strategic culture’. Brexit happened because too many in Brussels and elsewhere refused to heed warnings of impending disaster, choosing instead to shoot the messenger. If Europeans continue to merely talk about geopolitics, but not act on them, a far greater disaster awaits

However, China too must also face realities which begs another question; why is China so determined to control the South China Sea? Beijing believes that only a state with access to assured natural resources can assure power and influence in the twenty-first century. The Communist Party believes the only way to maintain power is to honour the post-Tiananmen 'contract' by which the Party retains unquestioned power, in return for guaranteeing improving living standards. That 'contract' can only be honoured if China controls 'strategic' resources.

Beijing has a choice to make. China is not a liberal democracy, but nor is President Xi a President Putin, for all the former’s strong ties with the People’s Liberation Army. For the past thirty years China has done well by supporting and often exploiting the ‘rules’ of the international system. However, China’s extra-sovereign behaviour and its ridiculous ‘historical’ claim to almost the entirety of the South China Sea, based on no more than a spurious nine-dash line on a strange map that appeared from nowhere in the 1940s, suggests a China for which might is fast becoming right, even if for China it is patently wrong.

China must seek a negotiated settlement to the South China Sea dispute for such a settlement is in the Chinese national interest and would demonstrate the real leadership to which China rightly aspires. As for Mrs Mogherini and her Globstrat at some point she will be forced to answer the same question Stalin once asked of the Vatican; how many divisions does it have?