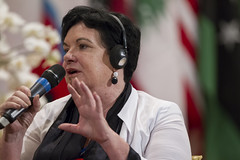 As G20 Leaders push for short-term recovery with structural reforms, Trade Unions call for long-term inclusive growth.
The G20 Summit in Hangzhou, China, endorses a pro-growth push and strengthens focus on the developing world. But G20 Leaders fail to see that a pro-demand growth trajectory, fair wage distribution and quality jobs for the future cannot be achieved with present structural reforms.

The 11th G20 Summit held in Hangzhou, China on September 4 and 5 closed with the release of its final communiqué and action plans. Despite negative interest rates, Brexit, stagnant growth in the Eurozone, with a strong chance for further monetary easing by the ECB, and fragile growth in G20’s emerging economies, the text is upbeat and focuses more on short-term structural solutions and long-term gains from innovation.

“The G20 is taking a pro-growth road but leaves jobs and demand aside. Despite important outcomes of the G20 Labour Ministers Meeting in July, answers to employment gaps and persisting low wages are reduced to one out of 48 paragraphs. While the Sustainable Wage Principles are endorsed along with commitments on apprenticeships and employability, there is no decisive policy link made to G20 growth strategies and follow-up actions are missing,” said Sharan Burrow, General Secretary of the International Trade Union Confederation (ITUC).

The L20 statement to the Summit called for policy coherence between the Antalya commitment on wages and the new Principles. Instead an “essential role” is given to structural reforms. If these are an extension of the austerity driven consensus of previous years, there will not be more equality in wages and new quality jobs. In neglecting policy options that would drive demand including infrastructure investment and strengthening labour market institutions, G20 countries will be left with a monetary policy that cannot drive growth on its own. Especially, when economies are faced with deflation or low inflation – both not addressed in the Hangzhou outcome.

“The global economy needs a boost of aggregate demand by raising wages and public investment now not more structural reforms which in the short term may cut demand and increase insecurity. Strong labour market institutions, quality jobs and infrastructure plans should be front and centre of G20 growth strategies and the guiding principles for structural reforms– not the other way around.”

“To achieve the growth ambitions of Brisbane, Leaders have to be more decisive on inclusive growth and give a strong role to trade unions and social dialogue,” said John Evans, General Secretary of the Trade Union Advisory Committee to the OECD (TUAC).

The communiqué makes references to synergies between demand- and supply policies and to opportunities for women, youth and vulnerable groups. But overall there is a lack of mandate to drive demand and ensure quality employment, also linked to the innovation agenda. It is all about the supply-side.

The Communiqué acknowledges the Sustainable Development Goals, the Addis Ababa Action Agenda and raises follow-up issues towards achieving the Paris Climate Agreement – ratified by the US and China at the Summit in a symbolic gesture. But more needs to be done than promoting energy markets and business involvement in developing countries:

“Similarly, on climate change, the communique remains very generic. Where is a strong call on raising ambition to stay below 2°C and to develop the just transition strategies needed to achieve that goal and keep workers in quality jobs?,” said Burrow.

The same applies to the G20’s new focus on “new paths for growth” regarding innovation strategies, the next industrial revolution and the digital economy. The L20 calls on the German Presidency next year to bring the technology and innovation growth ambitions together with the future of work and skills as a key long-term challenge, while bridging digital divides in developing countries and for vulnerable groups.

“Innovation drivers, industrial transformations and the digital economy if not well managed will leave many people behind. Innovation strategies need to be formulated collectively across different G20 bodies and policy areas. This is not only about investment and technology transfers. Trade unions need to join the new G20 Task Force as important partners in devising the sustainable and inclusive approaches needed to keep workers in good jobs and provide them with quality training at the right time, especially in manufacturing and services and in view of demographic and migration trends. This also concerns regulating new business models and forms of work in the platform economy, that are not decent,” said Evans.

The G20 finally recognized that the current refugee crisis is the biggest one since World War II and that there needs to be burden sharing and development assistance as many countries are struggling.

“We are responsible to do more collectively. The G20 failed to work on an Action Plan on labour market integration and training opportunities for migrants. Refugee families, unaccompanied minors and young adults need to be respected in their human rights and given access to jobs, housing, language and vocational training. The G20 communiqué lacks one big word at the right place: integration,” said Burrow.