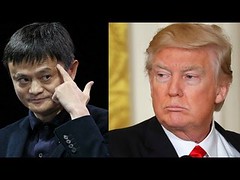 America and China -- war or peace?

Can Donald Trump, the man of the deal, could secure a new deal with China asks John West.
Singapore’s founding father and intellectual giant Lee Kuan Yew once cautioned that “the size of China’s displacement of the world balance is such that the world must find a new balance. It is not possible to pretend that this is just another big player. This is the biggest player in the history of the world.” And yet, for the first three decades of its high growth period, China kept a relatively low profile in international politics. Chinese leaders heeded the caution of great leader Deng Xiaoping that China should "observe calmly; secure our position; cope with affairs calmly; hide our capacities and bide our time; be good at maintaining a low profile; and never claim leadership." This is widely known as the “hide and bide” strategy.

But following the outbreak of the global financial crisis in 2008, and especially since the ascension of Xi Jinping to Chinese leadership in 2012/13, China has been doing much less hiding and biding. Its new assertive posture is evident in its aggressive behaviour towards Japan, its annexation of the South China Sea, its divide and rule tactics vis-a-vis ASEAN, its sanctioning of countries like Korea and the Philippines, its interference in Hong Kong affairs, and its disrespect for the political choices of Taiwan’s citizens. Its new leadership has also been manifest in initiatives like the Asian Infrastructure Investment Bank and the One Belt One Road initiative.

The new assertive China is most evident in its posture vis-a-via the US. Through slogans like “new type of major power relations”, Xi Jinping has been arguing that the US should respect China’s core interests (which includes Hong Kong, Taiwan, Tibet and the South China Sea). Moreover, Xi has also been trying to push the US out of East Asia and position China as the region’s paramount power. Similarly, in arguing for “a new security cooperation architecture”, Xi said that "strengthening military alliances with a third party does not benefit the maintenance of regional security …it is for the people of Asia to run the affairs of Asia, solve the problems of Asia and uphold the security of Asia. The people of Asia have the capability and wisdom to achieve peace and stability in the region through enhanced cooperation”.

These developments have led some analysts to argue that a great power struggle between the US and China is pushing them to war. As Graham Allison has recalled, more than 2,400 years ago, the Athenian historian Thucydides offered a powerful insight: “It was the rise of Athens, and the fear that this inspired in Sparta, that made war inevitable.” Can China and the US escape the Thucydides’s Trap? According to Allison, when a rising power rivals a ruling power, like Athens and Sparta, and Germany and Britain a century ago, the contests often end badly. Indeed, in 12 of 16 cases over the past 500 years, the result was war. "When the parties avoided war, it required huge, painful adjustments in attitudes and actions on the part not just of the challenger but also the challenged", wrote Allison.

Quite predictably, there has been much debate about the prospects for war between China and the US. Some argue that the dense trade, investment, finance and people-to-people relations between the two countries mean that war between the two countries would be too costly for both sides. But similarly close relations did not stop Germany and Britain from going to war a century ago. Another line of argument is that today China is so militarily inferior to the US, and so dependent on US markets and technology that it would not contemplate conflict with the US. But if China’s Communist Party were faced with an existential threat, such as over Taiwan or in the future even the South China Sea, it may fight for its life.

Looking ahead, the balance of power between the Chinese and American militaries will narrow quickly over the coming decades, and the US military will likely remain more thinly spread across the globe, while China’s remains concentrated in East Asia. For his part, Xi Jinping has argued “There is no such thing as the so-called Thucydides Trap in the world. But should major countries time and again make the mistakes of strategic miscalculation, they might create such traps for themselves.”

A new deal for China and the US?

At the beginning of the Trump presidency, there was a general perception in the US that while the two countries are more interdependent, their relations are also more contentious, and are now in a “precarious state”. But the arrival of the new administration also provides an excellent opportunity to recalibrate the relationship. In this regard, there are several broad currents in Trump’s thinking that could determine the fate of future US/China relations and the possibility of them falling into a Thucydides Trap -- America-First machismo, isolationism, national security, anti-terrorism, and fair trade.

Trump’s “Make America Great Again” machismo could push him into insisting that the US will play an even greater role as the indispensable strategic power in Asia. This could lead him into aggressive and conflictual postures regarding the South China Sea, Taiwan, Hong Kong and the US Alliances with Japan and Korea.

But Trump could also be pulled in the opposite direction by his isolationist tendencies, by which he believes that the US has been spending too much money on other countries’ defense. He could ultimately judge that the islands, islets, reefs and rocks of the South China Sea, and also the rocky Senkaku/Diaoyu Islands disputed by China and Japan, are not worth worrying about. After all, China’s occupation of the South China Sea is basically a fait accompli, China is buying off most of the other complainant countries, and these islands are an awfully long way from the US. If Trump were to contemplate a “grand deal” with China, it could agreeing to China’s occupation of the South China Sea, and pushing them leave Senkaku/Diaoyu Islands with Japan.

The greatest security threat to the US at the moment is North Korea, and cooperation with China is necessary to help solve this problem. China could also be further enlisted in the fight against radical Islamic terrorism, about which it is also concerned in its western border areas. The prize of the South China Sea would certainly help motivate Chinese cooperation. But it might also be necessary for Trump to agree to move out at least some of the 80,000 US troops currently based in Japan and Korea.

The big prize that President Trump, the businessman/President, would like to secure a meaningful opening of the China market, decent treatment of US enterprises in China, and better respect for US intellectual property. If he could achieve this, he may be willing to waive his interest in other political issues.

In short, there are many elements for a possible grand deal between China and the US -- a G2 deal -- which would enable them to avoid the Thucydides Trap. If however the US and China fail to negotiate such a grand deal, difficulties in managing the many points of tension in the US/China relationship, together with Trump’s volatile and unpredictable personality, could conspire to generate a conflict. The Thucydides Trap will always be stalking Mr Trump.

In another interview following President Trump’s inauguration, Singapore’s Prime Minister Lee also issued a warning about the increasing tensions between the US and China. With deep regret, he said that Singapore could be “coerced to choose between being friends with America and friends with China". And even in Australia, perhaps America’s closest ally in the Asia-Pacific, there is a growing chorus of voices like former prime minister Paul Keating and former foreign minister Gareth Evans arguing that Australia should be less reliant on the US, and should realign itself more closely with China.

Even in the best of circumstances, it seems increasingly clear that US is losing ground to China in Asia. The US is more easily distracted by its internal Washington issues and the Middle East. The demise of the TPP is a major blow to its position in Asia. It has not been able to respond effectively to China’s seizure of the South China Sea. China has been more capable of implementing consistent policies with its smaller Asian neighbours through the One Belt One Road initiative and other aid projects, defense cooperation and free trade agreements. Looking ahead, Trump’s administration may not have the kind of patience for long-term strategic engagement in Asia.
Tags: china, donald Trump, china/us relations, Thucydides Trap