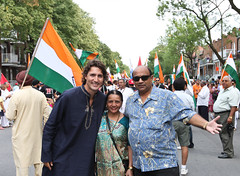 Canada needs to better exploit the talents and potentials of its Asian Canadians, especially Into-Canadians, writes John West.
Canada has loads of skilled Asian Canadians, but does not take full advantage of their skills. And Canada’s trade and investment connections with the fast-growing Asian economies remain very low (even if they are now growing), despite the country’s vast human linkages with ‘resurging Asia’. This Canadian paradox is perhaps most striking when it comes to India.

Some simple statistics highlight the Asianization of Canada. Today, over 6 million of Canada’s population of 36 million are of Asian origin. Its Asian population, representing 18% of total, exceeds the shares of Australia, the UK and the US, other Western countries with large Asian communities. And some 1.4 million Canadians are of Indian origin (“Indo-Canadians”), making them second only among Asian Canadians to the 1.8 million strong Chinese Canadian community.

Indians have a long history of settlement in Canada. The first groups arrived around the beginning of the 20th century. However, they faced widespread racism and discrimination, and various restrictions on their entry and stay in Canada.

Things started improving mid-century. The Indo-Canadian community was given the right to vote in 1947. And then in 1967, all immigration quotas based on specific ethnic groups were abolished, and Canada introduced a selective immigration policy based on migrants' skills and the country’s skill requirements.

The following decades saw a steady growth in immigrants from India. Close to 60% of Indo-Canadians reside in Ontario, mainly in the suburbs of Toronto, with another big slice in Vancouver, British Columbia. Calgary, now a boom town, is also attracting a growing Indo-Canadian population.

India is of course a land of great ethnic and religious diversity. And while this diversity is also present in Canada, there are relatively higher representations of Indian Sikhs and Christians than in India itself. Some Indo-Canadians have also come from East Africa and the Caribbean. While a vast majority of Indo-Canadians are of working age, the number of students coming from India has increased dramatically to over 100,000, a trend which has only benefited from the anti-migrant rhetoric of Donald Trump’s US administration.

Many Indo-Canadians have fallen victim to “migrant-dream syndrome”, whereby they left home full of hope and the skills demanded by the authorities, only to find a life of unfulfilled dreams.

Why? Qualifications may not be recognized. Or when they are officially recognized, employers may not recognize them. Migrants can also fall down the short list of candidates because they do not have local experience, or their English (or French) language capacity is not considered good enough.

In fact, the process of integration into the job market is arduous in the best of cases. Migrants must often settle for a “survival job” when they arrive, especially if they need to support a family. They might then graduate to a “transition job”, such as when an engineer gets a trade position in a factory. And then some, but certainly not all, find a position corresponding to their technical skills.

This is a natural process since migrants usually don’t arrive with Canadian “social skills” and networks. But it is all too often a great tragedy because it when it comes to skills, “if you don’t use them, you lose them”. In other words, “deskilling” is a real problem. Establishing a small business is often a refuge from frustration for Indo-Canadians.

Canada abounds with anecdotes of PhD taxi drivers, even if they can make a comfortable living. The worst case that I have seen is the Indian PhD in nanotechnology working as a restaurant server.

But the reality is that Canada has a far greater share of blue-collar skilled Indians than does the US, where many Indian Americans are doctors, engineers, information technology specialists and so on. This can mean that integration into the job market is harder. The policy shift to give provinces a greater say in migration policy is helping, as does better targeting of skill categories.

Overall, Indo-Canadians are doing fairly well, even if things could be better. Their level of education and incomes are higher than the national average.

There are many Indo-Canadians who have succeeded in trucking, real estate, IT, furniture manufacturing and farming. Indeed, half of Canada's 300,000 millionaires are either immigrants or first-generation Canadians who made the bulk of their money after their arrival to the country. And these include many Indo-Canadian millionaires like Steve Gupta, Surjit Babra, Ramesh Chotai, Vasu Chanchlani, and Barj Dahan. They also include people like Vikram Vij who opened up an Indian restaurant in Vancouver five years after immigrating to Canada.

Indian migration to Canada is usually a family decision, meaning that the head of family might sacrifice his career for the family. Thus, Indo-Canadian youth who complete their studies in Canada usually have better opportunities, although cultural glass walls and ceilings are still prevalent, especially in times of economic weakness. Canada also provides girls with a relatively “hassle-free” environment compared with India.

Canadian politicians and citizens openly recognize the country’s need for migrants and are proud of Canada’s “multi-culturalism”. They rejoice about the different “ethnic” districts, with their charm and restaurants. This means that the "migration atmospherics" are much more positive in Canada than in the US, Europe, or even Australia.

But the reality is that most Indo-Canadians do not have any European Canadian friends, and the rates of intermarriage are not high. And where intermarriage does take place, it is rarely between an Indo-Canadian and another migrant group. Social integration has its silos.

One reason may be that Indian Canadians tend to congregate in certain regions like Toronto’s Brampton and Mississauga. These communities provide an effective refuge for new arrivals, and help them settle in. But staying in such communities, as many do, inhibits their social integration into the broader community. Indeed, with a large Indian ethnic media in the form of newspapers and television, as well as community associations, it is possible to remain in an Indian cultural universe, while living in Canada.

Indo-Canadians have also been much more successful in political life than other Asian Canadians, and also more than Indians in American. The long list of members of national, provincial and local parliaments includes the present national Minister of Innovation, Science and Economic Development, Navdeep Bains, Minister of National Defence, Harjit S. Sajjan, Minister of Infrastructure and Communities, Amarjeet Sohi, and Minister of Small Business and Tourism, Bardish Chagger.

It is to be hoped that these politicians can continue to work for better economic and social integration of Indo-Canadians into their new home country. This could be very beneficial to Canada, as well as the migrants themselves. For example, a recent OECD report identifies sluggish productivity growth as the main long-term challenge facing Canada’s economy.

The OECD identifies two key priorities for meeting this long-term productivity challenge -- boosting innovation and investing further to improve both quality and access to tertiary education. Facilitating a better economic and social integration of Indo-Canadians is a sure way of improving productivity -- all the more so give that the evidence shows that migrants tend to be more innovative and entrepreneurial than locals.

It is also to be hoped that Indo-Canadians can make an important contribution to building more economic bridges with India. While they account for fully 4% of the Canadian population, Canada’s exports to India amount to less than one percent of total or $3 billion. Canada’s stock of investment in India is a trivial $1.2 billion, with India’s investment in Canada is more than double that at $2.8 billion, but is still too low.

It is natural that the US should be Canada’s predominant trading partner. But it is also clear that Canada’s trade and investment relationship with India is underdeveloped, as it is with many Asian and other emerging economies. This is why the Canadian government recently launched a “Global Markets Action Plan” to conquer markets that hold the greatest promise for Canadian business through vigorous trade promotion and ambitious trade policy.

But there is a need for much greater political and business leadership. Indeed, there is much that could be done to mobilize Indian business, chambers of commerce and other diaspora networks to promote trade and investment, such as through trade missions, networking etc. They have the knowledge and networks, talent and expertise for doing business in India. Experience shows that those firms that are successful in entering new export markets often leverage the technical and cultural knowledge and personal networks of their staff to do so.

In conclusion, Canada is a country which is performing below its potential. The land of the maple leaf is very much still on the margins of the emerging Asian century. It has low levels of trade and investment with this vast continent. And yet curiously it has the most Asianized society in the Western world.

Canadians celebrate their country’s diversity. And diversity should be Canada’s strength, but most regrettably it is not. Indo-Canadians, along with other Asian Canadians, may not be a panacea for all of Canada’s problems. But they are a great asset, indeed a secret weapon for the Asian Century, whose talents and potentials should be exploited to a much greater extent.

This article was first published by The Kootneeti on May 17, 2018.