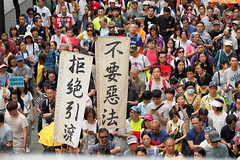 The Hong Kong Uprising and the consequences in Taiwan

Stefano Pelaggi analyses the conflict in the former British colony of Hong Kong, the challenge to China's national identity and the final loss of a Beijing projection in Taiwan.
The consequences of the protests in Hong Kong go from the definitive loss of a possible peaceful Chinese projection in Taiwan to the challenge of the young generations of Hong Kong to the concept of a unitarian Chinese identity. The rampant anti-Chinese racism among Hong Kong protesters suggests a clash over the identity in the former British colony which could be compared to the desinicization process that took place in Taiwan. While the events of Hong Kong have influenced, in an anti-Beijing perspective, the Taiwanese electoral campaign.

The rally held in Taipei on Sunday, September 29th in support of the Hong Kong protests showed the great participation of Taiwanese civil society in the events of the former British colony. The rally, called "929 Taiwan Hong Kong Grand Parade - Supporting Hong Kong, Fight Against Totalitarianism" was organized by 30 student associations, NGOs and other members of civil society. According to the organizers, 100,000 people endured typhoon Mitag's torrential rain to show their support to protesters who have been protesting in Hong Kong for 18 weeks.

Taipei carefully watch the events in Hong Kong, while the protesters in the former British colony have shown in recent months an incredible capacity to adapt to different circumstances. For those who followed the 2014 protests, the contrast with the events in recent days is enormous. Every day we see scenes of violence in the streets of Hong Kong, assaults on police trucks, barricades, tear gas and well-planned guerrilla warfare.

An escalation that pro-democracy protesters linked to the disproportionate reaction of the Hong Kong police in the first weeks of the protests. However, to think that those protesters are the younger brothers of the peaceful guys who occupied the square outside the Legislative Palace during the Umbrella revolution remains difficult to believe.

The cultural link between Hong Kong and Taiwan is very strong, the Umbrella protest itself is directly linked to the Sunflower Movement which started in Taiwan. However, many things have changed. In Hong Kong there is very little left of the hope that animated the 2014 season.

The feeling of the most extreme fringe of the protesters seems pervaded by a sort of sacrificial will: "If we burn, you burn with us". Even the behavior of most of the population was absolutely unpredictable, the residents took to the streets as soon as the riots began in order to defend the young protesters from the police.

Vandalism actions are accepted by most citizens as an inevitable consequence of the protest. The references to the order that the adult generations had launched during the Umbrella revolution were not repeated in these months in Hong Kong. Confucius pragmatism did not convey "a return to the private". As a result, commercial activities in the city are suffering and the economy is experiencing negative peaks with no signs of waning a revolt that has now gone beyond the initial motivations.

The events in Hong Kong are observed very carefully in Taiwan. The protests in the former British colony have profoundly changed the perception of Cross Strait Relation, the position of the KMT, the party which is closer to Beijing, has changed radically. Kuomintang Chairman Wu Den-yih expressed his opposition to police violence in Hong Kong and explicitly stated that Taiwan is a sovereign and independent state and cannot in any way be compared to Hong Kong.

2020 KMT presidential candidate Han Kuo-yu had initially avoided both exposing his vision of the Cross Strait Relation and any reference to the Hong Kong protests. Already in recent months he has had to change his approach, declaring solidarity with the inhabitants of Hong Kong and unequivocally denying the possibility of a "one country, two systems" in Taiwan.

The president Tsai Ing-wen, who a few months ago the polls described as destined to a defeat, seems to have no rivals today.
Faced with the events in Hong Kong, the neo populism of Han, all based on the search for economic growth even in the face of openings in Beijing, has proved to be ineffective. Washington's support for President Tsai was another important signal, given the continuing erosion of diplomatic allies and the hesitations of the West, the United States remains the sole and only reason of survival for Taiwan.

Much has been written about Donald Trump's approach to Taiwan, the US press and most international scholars have hypothesized the possibility of an instrumental use of the Taiwanese question. Nevertheless, Washington has shown itself a loyal and reliable ally over the years, probably as it hadn't happened for several decades.

The protests in Hong Kong did accelerated the process of reconfiguration of the Taiwanese national identity that began in the mid-1990s. Until then, only a minority was convinced of the need for a process of self-determination and belonging to a culture that was distinct from the Chinese one. The possibility of a reunification in those years was a long way off, even the supporters of a process of rapprochement with Beijing remained determined to wait for a sort of democratic transformation in China.

The whole world at the time looked to Beijing with hope and analysts were certain of starting a slow and gradual process of a democratic opening in the country. Many things have changed, the People's Republic of China has launched the challenge to US hegemony and the world order has profoundly changed. The Taiwanese national identity has now definitively moved away from the Chinese one, every year the polls draw an increasingly distance from Beijing.

The continuing pressure on the Taiwanese international projection determined a further division between the two shores of the strait. Faced with the events in Hong Kong, the formula "one country, two systems" loses all appeal to Taiwan, even for the most ardent supporters of the need for an approach to Beijing.

The gradual erosion of civil rights in the former British colony, particularly the increasingly difficult economic situation have shown all the limits of the "one country, two system". Chinese capitals have determined an incredible real estate speculation that has in fact made it impossible for the young generations of Hong Kong to maintain an acceptable lifestyle. Social mobility in the former British colony is increasingly limited while civil liberties are decreasing fast.

Precisely in January, Xi Jinping had appointed the solution of "one country, two systems" for the future of Sino Taiwanese relations, a formula that had been envisaged by Deng Xiaoping for Taiwan and then adopted in Hong Kong. The vicissitudes of the former British colony, the protests but also the economic and social drift on the island, created an additional distance between the two shores of the strait. Observing the evolution of Taiwanese national identity under the light of the news from Hong Kong, a great threat for the People's Republic of China appears evident.

The demonstrators in Hong Kong developed in a few months a strongly dialectic influenced by an ethnic division. Now, the cartels and slogans are not only directed against the Communist Party but also towards the Chinese. The racist choirs show a new dimension, which opens up complex scenarios with respect to the future of Hong Kong. Aware of the problematic nature of the issue, this complexity prevents the press of the People’s Republic of China to ever highlight this dimension.

The cultural challenge to the myth of the Han ethnicity, a foundation concept for the modern Chinese nation, is a battle that Beijing cannot afford to lose. But it is a battle that is fought with the weapons of persuasion and the so-called Chinese Sharp Power in Hong Kong, that so far has not seemed adequate for the victory of hearts and minds.

- Stefano Pelaggi, Adjunct Professor in "Sociology of Made in Italy" at Sapienza University of Rome