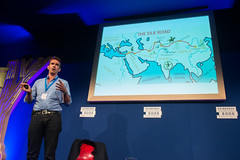 The New Silk Roads may well be a much more fragile region than author Peter Frankopan is willing to concede, writes John West.

The New Silk Roads, connecting the Mediterranean with the Pacific, is a new global centre of economic and political power, according to Peter Frankopan in his book "The New Silk Roads: the present and future of the world".

But based on my reading, it is also a region riddled with many conflicts, rivalries, and power plays. It has very little respect for Western values of democracy, rule of law and human rights, as dictators and oligarchs fill their pockets with money, and repress their peoples.

The frequent disappearance and arbitrary arrest of people, and internment of Uyghurs in China are surely symbolic of the region -- as was the assassination of journalist Jamal Khashoggi by Saudi agents in a consulate in Istanbul, which took place after the book’s publication.

In his book, Frankopan, a Silk Roads enthusiast, argues that "decisions being made in today's world that really matter are not being made in Paris, London, Berlin or Rome -- as they were a hundred years ago -- but in Beijing and Moscow, in Tehran and Riyadh, in Delhi and Islamabad, in Kabul and in Taliban-controlled areas of Afghanistan, in Ankara, Damascus and Jerusalem”.

He continues “I wanted to remind the reader that the world's past has been shaped by what happens along the Silk Roads. And I wanted to underline that so too will its future."

This book reads like a polemic, with its rollicking and exhausting ride through the New Silk Roads of Eurasia. Anecdotes follow factoids, many providing mixed messages, as Frankopan seeks to make his case for the importance of the New Silk Roads.

The first point to note is that the Silk Roads were never known as such in their heyday. This was a term coined in the late 19th century by the German geographer Ferdinand von Richthofen to describe the networks of exchange linking Han-dynasty China with the world beyond two millennia ago.

Today, we might imagine the historical Silk Roads being giant autoroutes with massive volumes of trade in silk and other products. The reality is that movements along the Silk Roads were actually rather limited in scale, with people travelling on foot or camel by other simple means. And of course, there were military invasions.

While the volume of trade was miniscule by today’s standards, some limited trade did take place, and perhaps most importantly the Silk Roads were a vehicle for the exchange of ideas and culture. The historical Silk Roads declined in importance around the end of the 15th century as sea travel emerged as a more cost effective form of transport.

So what is the case for a modern revival in the form of the “New Silk Roads”? The end of the Cold War and the dissolution of the Soviet Union led to the creation of new states in Central Asia. Rapid economic development in China, India and elsewhere in Asia has led to dramatic increase in demand for natural resources and agricultural wealth, which are in abundance in the Silk Road countries, notably in Central Asia and the Middle East.

Rapid economic development has seen China, India and several states from the Persian Gulf emerge as economic powers in their own right. This is evident in initiatives like China’s Belt and Road Initiative, the Chinese-led Asian Infrastructure Investment Bank, the rise of Indian IT companies like Infosys and airlines from small Gulf states like Qatar Airways, Emirates and Etihad.

States from the Silk Roads have also been snapping up prestige assets in Western countries, writes Frankopan. English football teams like Aston Villa, West Bromwich Albion, Birmingham City and Wolverhampton Wanderers have been bought by Chinese owners in recent years. Everton FC’s majority owner is Farhad Moshiri was born in Iran and now lives in Monaco.

Flagship stores like Harrods and Hamleys, Canary Wharf, ‘the Walkie-Talkie’ building at 20 Fenchurch in the City, or media outlets like the Independent and the Evening Standard all have owners with Chinese, Russian or Emirati backgrounds. It is a similar story in the US for the Brooklyn Nets basketball franchise, the New York Post, the Waldorf Astoria and the Plaza Hotel in New York, and Warner Music. In France many famous vineyards have been snapped up by entrepreneurs from the Silk Roads.

A particularly fascinating revelation by Frankopan is that the principal shareholder in the firm that owns the Carrara marble quarries in Italy is the bin Laden family, which means the marble used in the Freedom Tower in New York City is quarried by the family of Osama bin-Laden, who engineered the destruction of the Twin Towers that previously stood on the same site on 9/11.

For Frankopan, all of this is a sign that the global economic centre of gravity is moving away from the West towards the East. He does exaggerate somewhat however when he argues that in the east “there is hope and optimism about what tomorrow will bring”, while in the west “anxiety is so acute that countries are more and more divided”.

Not surprisingly, Frankopan highlights the arrival of Donald Trump to the presidency of the US, Brexit and political uncertainty in the EU. “The themes of isolation and fragmentation in the west stand in sharp contrast to what has been happening along the Silk Roads since 2015”, writes Frankopan.

It takes Frankopan almost 100 pages before he acknowledges that “in many if not most cases it is China that has been the catalyst in the reconfiguration of a part of the world that has played such an important role in world history”. All roads used to lead to Rome, now they lead to Beijing, writes Frankopan.

Indeed, by virtue of its large size and immense appetite for natural resources, China has become the most important economic partner for most of Asia, the Middle East, Africa and Latin America. Further, through the Belt and Road Initiative, and the Asian Infrastructure Investment Bank, it has also become an important development partner for countries in need of infrastructure.

But China has not always endeared itself to other countries on the Silk Roads. Countries like Malaysia, Maldives, Pakistan, and Sri Lanka have been left with large debts. India is deeply concerned by the prospect of being surrounded by Chinese bases in the Indian Ocean, and China’s intrusion into territory occupied by Pakistan, but claimed by India. China’s appropriation of the South China Sea and aggressive behaviour in the East China Sea have disturbed relations with Japan, Southeast Asia and the US.

China’s assertive behaviour in the Silk Roads has been a key spark in the China/US rivalry for influence. But while China is able to act with consistency over time, the US is not. It tries to speak as a relevant power in the Silk Roads, but its actions lack substance. Its withdrawal from the Iran deal has revealed it to be an unreliable partner. Its interventions in Iraq and Afghanistan have undermined its credibility, as have its disregard for Syria.

As a counterweight to China, “the US has decided to bet the house on India”, writes Frankopan. Not surprisingly, the US is seduced by India being the world’s largest democracy. But India has long been, and remains, a close partner of Russia, a major US adversary. Russia is still India’s largest arms supplier. It also has close relations with Iran, another US adversary.

And while India has long had differences with China, the Modi government is very keen to keep tensions under control. Further, since the writing of Frankopan’s book, India’s democracy is being fractured by Hindu chauvinism, which is tolerated and often promoted by Prime Minister Modi.

One curious omission in Frankopan’s text is the important role of Japan along the Silk Roads, as Nikolay Murashkin demonstrates. Japan was actually ahead of China in developing the romantic notion of the ‘Silk Road’ into a coherent relationship between East Asia and Central Asia. Other curious omissions are North and South Korea, and the nations of Southeast Asia and the Pacific Rim.

All things considered, the New Silk Roads is a perplexing region, with fractious relations between many countries. There are many successfully emerging economies. But also many rogue states, and immensely rich resources. Many rivalries are to be found in the New Silk Roads. Saudi Arabia and its allies versus Iran (and also Qatar). India and Pakistan. China versus the US and EU. And so on.

It is a region which China is trying to shape to its interests. But while the US and Europe are not taking the region seriously enough, the west does remain immensely attractive to countries of the Silk Roads.

Frankopan concludes that “What is striking, however, as new connections forge and old links are renewed, is that the west is in danger of becoming less and less relevant”. These words seem rather naive. The economic and governance superiority of the west is surely evident in that citizens from countries of the Silk Roads are so keen to visit, invest in, migrate to and send their kids to schools in western countries.

Moreover, companies from the Silk Roads are also very keen to acquire technology, by means foul and fair, from Western countries. More fundamentally, we cannot assume that China’s rise will be sustained, nor that its Belt and Road Initiative will not falter due to overreach.

Frankopan’s text was written before China’s scandalous behaviour which led to the present coronavirus crisis, a crisis that highlights the costs of China’s corrupt and incompetent governance, in a highly connected world. Indeed, this horrendous disease has travelled from China along the Silk Roads, especially to Chinese friends of Iran, Pakistan and Italy. Curiously, it seems to be following the same path of the Black Death of the 14th century which wiped out nearly half the world’s population.

In conclusion, the New Silk Roads may well be much more fragile than Frankopan is willing to concede. His starry-eyed book is unlikely to pass the test of time.

- Peter Frankopan. The New Silk Roads: The Present and Future of the World.