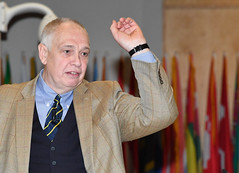 Europeans tempted by BRI must be under no illusions that over time the belt will gradually tighten and the road will begin to lead to political and strategic subjugation, writes Julian Lindley-French.
“In proposing the Belt and Road Initiative, the aim is to carry forward the spirit of the ancient Silk Road by combining the dream of Chinese people with that of people living in countries involved in the initiative…". President Xi Jingping.

Can Europe rely on the US for its strategic security and defence, and China for infrastructure investment? It is a timely question because yesterday Huawei launched its new mobile phone in London. It was also the implicit question at this past weekend’s excellent Lennart Meri Conference in Tallinn, Estonia which I had the honour to attend.  Naturally, given its location, much of the debate was focussed on the threat posed by Russia to the Baltic States. There was another strategic elephant in the room – China. More specifically, the strategic implications of China’s Belt and Road Initiative (BRI). Much of my work at present is focussed on elaborating my concept of complex strategic coercion and 5D warfare, the sustained and systematic application of deception, disinformation, destabilisation, disruption and implied destruction by Russia at the margins of NATO and the EU, and between the seams of Europe’s increasingly complex societies. After listening to the debates in Tallinn I am tempted to add a sixth ‘D’ – debt - Chinese debt.

The message was clear at Lennart Meri was clear: Europeans should be under no illusions about the level of strategic ambition driving China’s BRI. This $1 trillion project is part of a China-centric ‘cob-web’ strategy designed to tie countries economically to Beijing as part of Beijing’s broader strategic competition with the United States and others. Today, BRI involves sixty-eight countries with the ‘Road’ stretching along some 6000 kilometres of sea lines between south-east Asia, the Pacific (Oceania) and North Africa. The ‘Belt’ sees immense Chinese investment in roads and railways across Central and Western Asia, the Middle East and, critically, Europe.

There is no such thing as a free bridge

On the face of it such investment should be welcomed. However, there is no such thing as a free bridge.  Chinese investment is not Western aid and development. Rather, China uses its corporations to exert influence, and if needs be coercion, by using cheap loans for the development of infrastructure in poorer countries to promote reliance and dependency by driving up debt-GDP ratios. When a country defaults on the debt China aggressively demands recompense, often in the form of strategic infrastructure, with their corporations often acting as the spear-tip of coercion.

For example, China recently (and effectively) seized the Sri Lankan port of Hambantota when Sri Lanka defaulted on its Chinese debt. The case had eerie parallels with the 1842 ceding by China’s then Qing dynasty of Hong Kong Island to the British during the First Opium War. Britain engineered the acquisition of Hong Kong Island, in line with its strategic aim of the time, to expand its mercantilist and imperial ambitions in South and East Asia. For China, the Sri Lankan port is no less strategic.

It is not the only parallel between China’s Belt and Road Initiative and Britain’s imperial past. Jonathan Hillman has just published a fascinating May 2019 piece for Washington’s CSIS entitled War and PEACE on China’s Digital Silk Road. Hillman highlights the efforts, of what I have dubbed the post-1815 Second British Empire, to control strategic communications. In the wake of victory over Napoleon what had been primarily a commercially-driven mercantilist empire increasingly became ‘strategic’ as British corporate and state interests merged. In Britain’s case the establishment of so-called All Red lines, an exclusive network of telegraph lines, helped facilitate London’s control and gave Britain a critical strategic communications advantage over rivals.

China is endeavouring to do a similar thing in this digital age through control over digital networks. 95% of all international communications take place through sea-bed cables. One of its flagship projects is called PEACE and takes place in Pakistan, formerly part of the British Raj. PEACE, or the Pakistan East Africa Cable Express, is designed to enable the fastest internet link between Asia and Africa.  The PEACE cable also begins in the port of Gwadar in Pakistan, which is also part of the China-Pakistan Economic Corridor, and at which China would like to establish a naval base.   In other words, China is developing the capability and capacity to threaten those it does not control, and enhance its influence over the rest.  At present, China, or rather Huawei, is laying or enhancing some one hundred high data rate digital lines under the sea.

What of Europe? The dilemma that many Central and Eastern European countries (CEEC) face, but refuse to confront, concerns the nature, length and political implications of the strings attached to Chinese money. And, the likely impact of taking such money on their strategic relations with the United States.  In November 2015, China-CEEC co-operation was established at a big bash in Suzhou City. The Accord was (and is) where BRI enters Europe, with projects ranging from development, industrial capacity-building, innovative financing, trade enhancement and beyond.   On the face of it, the Accord simply enables trade and promotes prosperity for debt-ridden European countries. However, if past patterns of Chinese influence are to be applied in Europe, the Accord also implies a degree of potential coercion. It is that potential for Chinese coercion of both EU and NATO members that is worrying both Brussels and Washington. In particular, that in a crisis certain EU and NATO members would be ‘persuaded’ by Beijing to withhold their support for the Americans and thus, in effect, paralyse the Alliance.

Why is China so aggressive? Beijing is subject to a pressing imperative which drives China to apply all and every means available to expand its economy, and which belies the lazy Western idea that China always takes a long view. You know, the old 1960s Zhou Enlai joke about it being too early to assess the impact of the 1789 French Revolution. It is an imperative that was laid out clearly in President Xi Jingping’s 2013 China Dream speech, and which has been regularly re-stated since. Put simply, the Communist Party survives in unfettered power in China because in the wake of the 1989 Tiananmen massacre of democracy protesters the Chinese state established a new ‘contract’ with its people – unquestioned power in return for rising prosperity. Since 1989 Beijing has fulfilled that pledge through the astronomic growth of the Chinese economy often at, or above, 10% per annum. Much of that growth came from the modernisation of China itself. However, there are now signs that such internally-driven growth is slowing and China must seek to maintain growth through externally-driven extractive (Arctic BRI?) and exploitative policies abroad, hence the Belt and Road Initiative, whilst limiting access to the enormous Chinese market.

The BRI is thus part of an expansionist grand strategy driven by internal political imperatives. As such, the BRI is simply the flip side of China’s burgeoning military capabilities evident in its aggressive policies in the South China Sea and far beyond. The United States may have a world-wide presence, but it has no such aspirations to exert the kind of control over other states that Beijing seeks through the BRI.

Could Europeans both rely on the US for its security and defence, and China for infrastructure investment? Within certain limits, and if China observed the kind of rules enshrined in the World Trade Organisation. The problem is there are few limits to BRI, which is precisely why it is so seductive and so dangerous given the level of indebtedness it can generate. Whilst China has occasionally offered debt forgiveness it is rare, and only when a bigger strategic prize is in the offing. Beijing also refuses to play by trade (and many other) rules which the US not only observes, but by and large created. Critically, Europeans must understand that the United States and China are, and will continue to be, strategic competitors. The current round of trade tensions and the tech Cold War are merely symptoms of a structural competition that will shape geopolitics in the twenty-first century. And, given the nature of Sino-US strategic competition it will sooner rather than later force those Europeans seduced by Chinese money to choose sides.

It is vital Europeans understand the differences between democratic America and autocratic China. Yes, the United States can drive hard bargains on its European allies at times. Yes, US corporations often play hard ball. However, the Americans have been, and continue to be (European Deterrence Initiative???), extraordinarily generous to Europeans by affording them a defence which is far beyond that which Europeans seem willing themselves to afford. Moreover, because of the many separation of many powers under the US Constitution the relationship between the US Government and US commerce is often as tough as any between the US and third countries. There is no such separation of powers in China.  Indeed, Chinese companies are legally-required to act as agents of the Chinese state. It is precisely this ability to use corporate entities as strategic leverage which is making so many British lawmakers uneasy about Huawei’s possible role in the development of Britain’s 5G network.

In other words, those Europeans tempted by the shiny baubles in the BRI seduction pack must be under no illusions that over time the belt will gradually tighten and the road will begin to lead downhill towards the chains of political and strategic subjugation. In such circumstances, those same European states could well lose the protection of the United States as the cohesion of NATO becomes progressively undermined. In the security vacuum that would inevitably ensue they would also find themselves at the mercy of another strategic predator – Russia. Lennart Meri, of all people, would understand that.