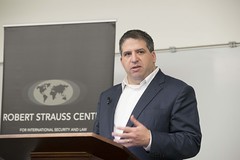 Book Review: US Strategy in the Asian Century – Empowering Allies and Partners

The United States is a country that has lost its way in the emerging Asian Century. The new administration will face some daunting challenges in developing an effective strategy for the Asian Century.
President Barack Obama’s “pivot to Asia,” which promised so much, was ultimately a fizzer with few concrete achievements. When President Donald Trump rejected the Trans-Pacific Partnership (TPP), which was designed and led by the Obama administration, it greatly undermined the reliability and credibility of the US as a partner for Asia. As well, President Trump’s severe criticisms of America’s Asian allies like Japan and South Korea greatly shook these countries, who thought they had a friend in Washington.

Against this background, Abraham Denmark’s new book, US Strategy in the Asian Century – Empowering Allies and Partners, offers much food for thought. However, the reality is that many US allies and partners have already become more empowered and independent-minded in reaction to America’s erratic and incoherent approach to Asia.

For example, following America’s withdrawal from the TPP, Japan and Australia picked up the leadership of these trade talks, which led a renegotiation of the agreement. Thus, the Comprehensive and Progressive Agreement for Trans-Pacific Partnership (CPTPP) came into force on 30 December 2018, with several US allies and partners on board, but without the US. Another Asian trade deal, the Regional Comprehensive Economic Partnership (RCEP), was signed on 15 November 2020, reportedly under China’s leadership. Once again, a number of US allies and partners signed up, without the US being a part of this agreement. This was also the case when the trade ministers of Australia, Japan, and India recently agreed to develop a supply chain resilience program for the Indo-Pacific region.

While the US has locked horns with China in great power competition, its erratic actions have enabled China to steal a march in the quest for Asian leadership, seen through its Belt and Road Initiative and the RCEP. Ironically, China has now expressed interest in joining the CPTPP, even though China was explicitly excluded from the TPP by the Obama administration.

Within his book, Professor Denmark argues that as the world has changed, and so must America’s alliances and partnerships. On this basis, allies and partners should be called upon to do more. While this argument may have seemed reasonable several years ago when Denmark began working on his book, nowadays many allies and partners feel that it is the US that should do more. For example, the US has been noticeably absent from international leadership during the COVID-19 pandemic.

Denmark argues alliances and partnerships should not be restricted to the military domain but should cover all elements of national power, namely military, economy, technology, and norms and standards. And yet, the most promising multi-sectoral initiative, the TPP, was jettisoned by President Trump, and there is no sign that the Biden administration will seek to join the CPTPP, especially given the current state of the US economy.

Much of Denmark’s book focuses on the competition between the US and China, which predates President Trump, but was made explicit in Trump’s National Security Strategy and National Defense Strategy. Yet Denmark claims that there has been no consensus in the US government about what the US is competing for with China. Some government officials see China as a threat to freedom around the world. Others have a more nuanced approach. As Denmark argues, a US strategy in the Asian Century must reflect what it is competing for.

Denmark argues that the US is competing with China over two related conceptions. First, there is power – military, political influence, economic, and technological. And then there is the issue of how power is used to shape the Indo-Pacific order – how international laws, norms, and institutions manage conflicting interests between countries.

As the US-led liberal regional order is now increasingly threatened by the shifts in the regional balance of power, Denmark argues that the US’s allies and partners are tremendous assets. The US needs to “use them” in its competition with China and its efforts to revitalise and sustain a healthy liberal order. Denmark does recognise that the US needs to understand where allies and partners are coming from, including their domestic politics. Many have close, but differing, economic linkages with China such that a nuanced strategy is required, enabling relationships with both the US and China. Indeed, Denmark argues that Indo-Pacific strategy should be cast less as an existential competition with China and more as an effort to maintain liberal principles.

Denmark also recognises that allies and partners have deep concerns about the reliability and sustainability of American power going forward, especially as it relates to China. This has been exacerbated by the US’s poor response to COVID-19. However, some allies, like Japan, have appreciated President Trump’s toughness on China. President Obama’s approach on China was a bit muddled and unclear.

Allies are looking for a new administration that understands the advantages of alliances and does not take a transactional approach, according to Denmark (the book was published in August 2020, before the US presidential elections). In this context, they should be happy with Antony Blinken, President-elect Biden’s pick for secretary of state, who is reportedly a multilateralist and internationalist. But Blinken’s hands will be full with many priorities. He will need to re-engage with a whole range of international institutions, especially NATO, where much damage has been done in recent years. It is also not clear how many resources he will have for implementing a new US strategy for the Asian Century.

Denmark’s thinking on America’s alliances and partnerships is very rich and realistic, undoubtedly a product of his diverse appointments – notably as deputy assistant secretary of defense for East Asia at the Pentagon during the Obama administration, and at the Woodrow Wilson International Center for Scholars and Georgetown University. But his language is too often couched in terms of what we want allies to do and how we get them to do it.

It is true that most Asian countries welcome the prospect of a more stable and predictable US policy towards Asia under President Biden, and that they believe the US has an important role to play in Asia’s security. The US is the only country that is powerful enough to balance Chinese power by itself. But after the chaos of the past two decades – Middle East wars, the Global Financial Crisis, the Donald Trump presidency, and mismanagement of COVID-19 – the US needs to approach its allies and partners with greater modesty and humility. And the US needs to know that allies and partners will always be hedging against the next shock or distraction which could emanate from the US.

This book review by John West was first published by the Australian Institute of International Affairs on 11 January 2021.