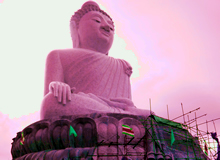 Toronto is a biryani!

The best way to arrive in Toronto is by train, preferably after spending three days and four nights travelling from Vancouver. After crossing the Rocky Mountains, the prairies and northern Ontario, you will appreciate the importance of the transcontinental railroad to the formation of Canada as a country. And when you arrive at Toronto's Union Station you will be dazzled by Canada’s largest and most opulent railway station, one of the finest examples of Beaux-Arts architecture.

You should stay at the Fairmont Royal York Hotel, just opposite Union Station, which is a symbol and reminder of the great days of train travel. This château-style building, which opened in 1929, was the tallest building in Toronto at the time. Don't be surprised if you bump into Queen Elizabeth II or other members of the Canadian Royal Family, because the Royal York, with its Royal Suite, is their residence of choice in Toronto.

The wandering tourist can enjoy a feast of architecture starting with the Scadding Cabin of 1794 and the Guild Log Cabin of 1795. My favourite trails take you through the "Philosopher's Walk" at Toronto University, which has one of the world's most beautiful campuses.

With good planning, you will arrive for lunch at the St. Lawrence Market, named the world's best food market by National Geographic in April 2012. And then meandering through the streets of old Toronto can lead you to the Distillery District, a historic and entertainment precinct with numerous cafés, restaurants, and shops housed within a former distillery dating back to 1832. Another stopover for the intrepid walker is Kensington Market, one of Toronto's most vibrant and diverse neighbourhoods. Either way, you won't be disappointed!

Also worth a visit is Casa Loma (Spanish for Hill House), a Gothic Revival style house and gardens in midtown, constructed from 1911-1914, and which is now a museum and landmark.

Nature and adventure on the trails of the First Nations

The Iroquois people inhabited the Toronto region before the arrival of the European settlers who have made cosmopolitan Toronto the fourth biggest city in North America. A word from the Iroquois language, “tkaronto”, meaning a place where trees stand in water, may indeed be the origin of the city’s name.

The life and spirit of the First Nations is still very much alive in Canada’s finance and business capital. A 15 kilometre “shared path” along the Humber River connects an ancient Aboriginal portage route to today’s roads and railways. The Old Mill Hotel and Restaurant provides a charming and historical stopover for a well-deserved lunch on the shared path. Hikers can also weave their way across Toronto’s districts and suburbs through a system of ravines, a distinctive feature of Toronto’s geography, which were formed after the last ice age, some 12,000 years ago.

Toronto truly is a “city within a park”.

A short ferry trip from the city out to the Toronto Islands (formerly known as Island of Hiawatha) makes a great excursion for cycling, canoeing, walking and swimming. To the descendants of the Ojibwa, now the Mississaugas of the New Credit First Nation, the Toronto Islands are still sacred land.

Within a short distance from Toronto, the province of Ontario offers endless opportunities for fishing, hunting, skiing and all sorts of adventuring. With over 400,000 lakes and rivers -- more than two-fifths of all the freshwater on the earth -- Ontario offers unlimited freshwater fishing possibilities. Lake Simcoe, just 40 minutes north of Toronto, is a great spot for ice fishing. And North West Ontario is the ideal habitat for hunting whitetail deer, moose and black bear.

Any discussion of adventure in Toronto would not be complete without mentioning the “EdgeWalk” at the CN Tower, Toronto’s tallest urban adventure and the world’s highest full circle hands-free walk. Even without attempting the EdgeWalk, a trip up the 553.33 metres high concrete communications and observation tower, at one time the world’s tallest building, provides an unbelievable view of downtown Toronto and beyond.

“An art must grow and flower in the land before the country will be a real home for its people”, Canada’s Group of Seven painters said in their inaugural exhibition catalogue. And so it was that this Toronto-based group sought to promote a sort of “Canadian Impressionism”, which became the predominant school of Canadian art, representing the landscape as a symbol of national pride and cultural identity. “We loved this country and loved exploring and painting it”, said Lawren S. Harris, a member of the group.

Toronto’s splendid Art Gallery of Ontario, an architectural marvel itself, has a wonderful collection of Group of Seven paintings. But you must go to the McMichael Canadian Art Collection to see the best collection. Moreover, this rustic log cabin museum, nestled in the woods in Kleinburg, just on the outskirts of Toronto, allows you to see the painting in context.

At the Museum of Inuit Art, you can explore the art of the Inuit (eskimo) community. Toronto Zoo has a First Nation Art Garden which was developed to share the distinct origin story and worldview of First Nation people in North America, while the Royal Ontario Museum has an excellent gallery dedicated to the cultures and traditions of Canada’s First Peoples.

But perhaps the artistic soul of Canada may be best found in Toronto’s Hockey Hall of Fame. Dedicated to the history of ice hockey, it is both a museum and a hall of fame. There is a tribute to Tim Horton, a Canadian hockey player, whose name can be found gracing Canada’s most popular chain of coffee shops. You can have your photo taken alongside the Stanley Cup, the most prestigious award for the “National Hockey League”, in which 23 American and 7 Canadian teams play. No Canadian team has won the Stanley Cup for some 20 years, and the Toronto Maple Leafs team won their last championship in 1967. Astonishly, Canadians’ passion for this exciting and violent sport remains undiminished. This wonderful people is defined by their resilience and optimism.

Niagara -- the Falls and a lot more

The world’s most famous and beautiful waterfall, Niagara Falls, is an easy day trip from Toronto. And without doubt, the Canadian side of this natural wonder is the most beautiful.

Feel the spray in a “Journey Behind the Falls”. Experience the thundering roar, and awesome power of Niagara in a cruise. Soar high above the racing Niagara River through the air in an antique cable car, while far below the torrent of water abruptly changes direction and creates one of the world’s most mesmerizing natural phenomena – the Niagara Whirlpool. Take a walk like no other, along a boardwalk at the very edge of one of the world's wildest stretches of whitewater! Marvel at the relentless power and beauty of nature. Or see the Falls the best way, in a helicopter tour.

But there is a lot more to Niagara than the Falls. There are wonderful hotels offering the full entertainment experience, including casinos. Then you can get great bargains in Niagara’s many malls, shopping centres and factory outlets.

A short bicycle ride or drive from the Falls is the village of Niagara-on-the-Lake, the most beautiful village in Ontario, if not, all of Canada. You will be seduced by its wonderfully preserved and charming architecture, and its stunning site where the Niagara River meets Lake Ontario. Niagara-on-the-Lake is the gastronomical capital of Ontario, with first-class restaurants and hotels, and also top ranking spas.

Niagara-on-the-Lake is also the birthplace of Ontario’s modern wine industry, with twenty-five vineyards just nearby. The Niagara Icewine Festival in January celebrates Ontario's most famous wine in a winter wonderland setting, and the Niagara New Vintage Festival in summer gives visitors a chance to be the first to try the year's wines. Visitors from across Canada and the US also flock to Niagara-on-the-Lake for its Shaw Festival, which has delighted visitors since 1962, with its works of George Bernard Shaw and other playwrights.

Any day that you arrive in Toronto, there is bound to be at least one festival taking place. Take part and enjoy yourself!

To experience the rhythm and soul, food and shopping of Toronto, every visitor must explore the city’s sprawling neighbourhoods and satellite cities. As writer Shawn Micallef said, “It’s a city of subtleties, so visitors should walk around and slowly absorb the details”.

Yorkville’s bustling streets and cobbled lanes house designer boutiques, luxury hotels, galleries and fine dining. Entertainment District is jumping thanks to its nightclubs, theatres, sports venues and cinemas. Queen West is funky town and the centre of all things cool with its mix of textile stores, tattoo parlours, chic boutiques, loft spaces, vintage stores and bar patios. Toronto is one of the leaders in the global craft beer revolution, and plenty of these beers can be found down Queen West and elsewhere, especially during Ontario Craft Beer Week.

The Waterfront, perched on Lake Ontario is home to festivals and a thriving contemporary art scene. The Gay Village at Church-Wellesley is the gathering place for the city’s LGBT community, although everyone is always welcome to visit its lively offerings of restaurants, shops, coffee hangouts and clubs. You can take a stroll along the boardwalk at the Beaches and experience Toronto’s Riviera.

Toronto’s Chinatown is one of the largest in North America and one of several major Chinese-Canadian communities in the Greater Toronto Area. In fact, there are six Chinatowns in Greater Toronto, including in the municipalities of Markham and Mississauga. In Markham you will find Pacific Mall, the largest Chinese mall outside of Asia.

“Little India”, Gerrard India Bazaar, is the largest marketing place of South Asian goods and services in North America. With over 100 shops and restaurants which represent regional diversities of South Asian culture, food, music and products, this slice of the Indian subcontinent offers a wide selection of services and products exhibited in an exotic display of sights, sounds, tastes and aromas. But with Toronto’s rapidly growing migrant population, other South Asian neighbourhoods have also developed in the surrounding cities of Mississauga, Brampton, Vaughan, Richmond Hill, Markham, and Pickering.

So if Toronto is a biryani, where can you find the best biryani in Toronto. Gerrard India Bazaar offers the visitor an immense array of choices. But according to my Indian friends, the best biryani is still served in Indian homes, where loving wives reproduce recipes handed down to them by their mothers and grandmothers!


So come on over and see us in TO. Foreigners can be assured of a very warm welcome -- as an Australian, I know from experience. Toronto and Canada are unique models of cultural diversity and social harmony which should provide inspiration to the rest of the world!