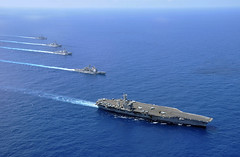 US and China: In the Strategic Balance

The Strategy is clear. “On the issues concerning China’s territorial sovereignty and maritime rights and interests, some of its offshore neighbours take provocative actions and reinforce their military presence on China’s reefs and islands that they have illegally occupied. Some external countries are also busy meddling in South China Sea affairs; a tiny few maintain constant close-in air and sea surveillance and reconnaissance against China. It is thus a long-standing task for China to safeguard its maritime rights and interests”.

In 2014 China will (officially) spend $132bn (and probably far more). On the face of it this figure represents a 12.2% increase on last year’s expenditure but in reality simply harmonises official and non-official defence expenditure. It is the latest year-on-year double-digit growth in Chinese defence spending since 1989. China’s strategic ally Russia is also engaged in a massive hike in its defence expenditure with 40% of all public investment now committed to Russia’s armed forces.

Meanwhile, the US defence budget will fall from $500bn in 2015 to some $450bn in 2020. The defence budgets of the European allies are still being raided to fund social security. The mythical NATO target of 2% GDP on defence is being observed in the breach as demonstrated by British Government plans for an insane further £1bn of cuts to an already hollowed-out British military.

Only the strategic denial and strategic illiteracy all too prevalent in European chancelleries these days can blind one to the implications of this shift – a major twenty-first century war – a Third World War - cannot be ruled out. Read between the ‘peace’ and ‘co-operation’ lines in the Chinese strategy and the message is clear; under the rubric of “active defence” China is the coming power, and the US, Japan, South Korea and rest of the region and the world had better watch out.

The six key takeaways of the Strategy are as follows:

1. The South China Sea is Chinese and China will do whatever it takes to ‘defend’ its sovereignty. The Strategy refers to the Americans as an “external power” that meddles in “South China Sea affairs”;

2. At some point China will act to ‘resolve’ the “Taiwan issue” on Chinese terms. “The Taiwan issue bears on China’s reunification and long-term development…reunification is an inevitable trend in the course of national rejuvenation”;

3. China intends to create global-reach deployable military force. “In response to the new requirement of safeguarding national security and development interests, China’s armed forces will work harder to create a favourable strategic posture with more emphasis on the employment of military forces and means…”

4. China is preparing for an arms race with the Americans that it believes it can win over time. The Strategy states, “In response to the new requirement arising from the worldwide RMA, the armed forces will pay close attention to the challenges in new security domains, and work hard to seize the strategic initiative in military competition”;

5. The People’s Revolutionary Army and Navy is not a function of the Chinese state, but the Communist Party of China. Under Xi Jingping the Party has a) become far more strategic in its international ambitions; and b) combines a complex mix of ideology and nationalism; and

6. Future war is a distinct possibility and China intends to fight and win such a war.

The strategic balance between the US and China in Asia-Pacific is almost the mirror image of the challenge Britain faced when the Germans passed the 1898 and 1900 German Navy Laws. On paper the British still looked vastly superior at the time. However, Britain had a worldwide empire to protect whereas Imperial Germany could choose where and when to complicate Britain’s strategic calculus. Britain had to respond.

Recently I chaired two American generals at a NATO meeting. At one point I challenged them with a scenario. It is 2020 or perhaps more likely 2025. The cuts to European defence budgets have gone on apace. The renewed cuts to the British defence budget have left the British Armed Forces emaciated, hollowed-out and dysfunctional, and the other NATO allies are little better. Suddenly a Russian-inspired crisis breaks out in the Baltic States as a snap Russian exercise starts to look like a prelude for the invasion of Estonia. Simultaneously, China moves military forces to occupy several of its reclaimed reefs and islands whilst the People’s Liberation Navy threatens Taiwan. The Americans find themselves in the worst of all strategic worlds, insufficiently strong in either Asia-Pacific or Europe and with allies that are more of a complication than support.

Given last month’s Chinese-Russian exercise in the Eastern Mediterranean such engineered crises-in-parallel cannot be ruled out. So, if you think I am exaggerating ask yourself this; do you think my strategic analysis wrong in fact or by assessment? Or is it that the whole, dark big picture I paint is so dark, so Edvard Munch, you would rather not think about it? Sadly, for most European leaders it is a crisis too far. They would prefer instead to appease a changing strategic reality than confront it.

US-China strategic relations are in the balance, but not yet on the brink. The world is a safer place when the West together is strong. It is about time our leaders remembered that. However, a strategic clock is ticking, and it is Made in China.