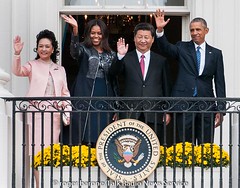 Who Will Make the Future?

Who will make the future? asks Professor Julian Lindley-French.
The masters of the universe met in Washington last week. Watching the body language of Presidents Obama and Xi was like witnessing a form of geopolitical cross-dressing. President Obama once the youthful Mercury of a new America was lame duck expectant. President Xi, the unelected victor of a thousand Party power struggles, was self-promotingly, self-assured. This was no ordinary state visit. Xi had come to America to confirm China as the ‘other’ superpower in a new bipolar world. Power is back, red in tooth and claw.

Viewed from close to the Russian border in a tired, failed Europe the sight of Obama and Xi power-striding across the White House lawn looked a bit like the last lap of one of those weird Olympic walking events in which the protagonists are endeavouring to move fast without ever breaking into a run. For that was the essential point of Xi’s visit to Washington; to mark the start of the marathon bipolar power race that will come to define the twenty-first century. Hopefully peacefully, quite possibly not. Like all marathons the real racing will not come until the latter stages.

Obama and Xi walked side by side trying by their forced, relaxed nonchalance to communicate one’s strength to the other. A hint of the hard yards to come came from Obama – cyber, industrial and military spying, trade imbalances, dumping, China’ extra-territorial ambitions in the South China Sea, were all (sort of) on the agenda. However, as with so much to do with the foreign policy of this White House, almost but not quite. Xi just matched Obama step for step, firm in his belief that when the real racing begins power will do the real talking. Indeed, having confused its values with its interests for far too long Xi believes America will be exhausted and Washington will as ever snatch defeat from the jaws of its own over-stated victory, particularly in Asia.

Europe’s puny leaders looked on. It felt ever so like the Cold War when Europeans routinely watched the Americans and the Soviets debate Europe's destiny over Europe's head. One man clearly understood that. Although not in Washington President Putin was knocking hard on the White House door by offering support over Syria and thereby suggesting a return to the ‘the good old days’ when Soviet Russia really mattered, rather than merely appeared to.

As an aside, Britain went its own increasingly idiosyncratic way last week by offering a glimpse of its future strategic life outside the EU. Having for years been America’s poodle Chancellor George Osborne was in Beijing trying to turn Britain into China’s Pekinese. Osborne, Cameron’s designated 2018 successor as prime minster, offered China terms to support a British civil nuclear programme which Britain had once given the world that were so advantageous they were close to slavish.

Last week was all about power and weakness, who's up and who's down, who's rising and who is most decidedly not. Whilst America and China pondered the future of the world millions of illegal migrants were continuing their Cook’s Tour of EU countries, deciding which one they would like to try this week. They were noisily but ineffectually assisted by weak European leaders busily engaged in destroying their own rules and further crumbling the Tower of Babble that the EU has become. Power? Rules? Who needs them?

And that is the tragedy of Europe’s great liberal crisis. European leaders seem unsure now as to whether the security of others is now more important to them than the security of their own people. Small leaders in a big world,who refuse to prepare or compete offering instead empty and meaningless liberal mantras. Word is that Chancellor Merkel will be made UN Secretary-General for turning Germany (and much of northern Europe) into Lebanon on the Rhine. Well, that’s alright then.

‘We’ Europeans are lost in a failing, declinist, liberal experiment called the EU unable or unwilling to see what is soon to come over our horizons, ever more subject to the will and whims of emerging illiberal Great Powers. Our great friend America is over-stretched and politically indifferent in equal measure, and thus we Europeans have doomed ourselves to suffer the prescriptions of somebody else’s future. And I say that as a confirmed liberal. Make no mistake, self-obsessed Europe's future also died in Washington last week as little institutionalism was replaced by big, brash, bipolar power politics as Europe’s fall from power was eclipsed like a giant blood moon by China’s rise.

If Europe is to survive this Huxleyesque world Europeans must escape the trap they set for themselves; the institutional denial of power that is constraining Europeans within Europe and Europeans without Europe to disastrous effect. Indeed, if Europe is to influence the world America and China will together make and quite possibly break, and face down the ‘mini-me’ tribute act that is President Putin’s Russia, then Europeans must re-learn and quickly the rules of the game they gave to the world. Europe must re-grasp the principles of power and influence that for centuries made Europeans the champions of the world.

It was not meant to be like this. At the end of the Cold War ‘Europe’ was meant to emerge as the ‘other’ liberal pillar of a liberal world-wide west which would dominate the world. Instead, in Washington we witnessed the launch of the world-wide East of which America is now a part, with power no longer centred in the American half of the Atlantic, but somewhere deep in the Stygian depths of the mid-Pacific.

There was one final irony last week in Washington. China's rise will release America from the shackles of European institutionalism and that most entangling of alliances if Europeans continue to refuse to invest in power. After all, institutions in the American power mind were always for lesser peoples not blessed by America’s manifest destiny. Make no mistake, once America’s most European of presidents has gone Washington will get back to the business it loves best; power.

Who, indeed, will make the future? It will not be we Europeans and forgive me my hubris but the world will be worse for it.

SDSR 2015: The Second Battle of (Max) Hastings
Who Will Make the Future?
Countering Russia's Strategic Maskirovka