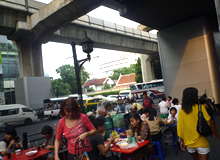 Migrants in Asian countries have potential to contribute to the society and economy in which they reside. But all too often they suffer from migrants' rights abuses.
Migrants, be they documented or undocumented, are potential assets for the economy and society of their settlement.

Then there are Asians, mostly lower skilled, who migrate elsewhere in the region. They travel along well-trodden corridors -- like Indonesia to Malaysia, Cambodia to South Korea, the Philippines to Hong Kong and Singapore, Korea and China to Japan, North Korea to China, Bangladesh to India and so on.

And while these poor migrants go in search of a better life for their families and themselves, all too often they suffer human rights abuses from their employers, the local population and sometimes even the local authorities.

This is shameful. After all, migrants are human beings, just like you and I.

Malaysia's mistreatment of its migrants is legion. Many are victims of "forced labor" in Malaysia's electronics goods industry, as thoroughly documented by Verite, an NGO, in a study financially supported by the US Department of Labor.

Listen to some of their voices:

"The contract that we signed, it was written in English. The agent asked us to sign, and that was it. They explained it, but once I reached Malaysia, things were totally different from the agreement." Male Bangladeshi worker in Klang Valley.

"The whole house has three rooms. There are over 40 people living here. It is overcrowded. There is no place to even walk around." Female Burmese worker in Klang Valley.

"They never give the passport back to workers. I feel very angry because they won't let me have my passport." Male Nepalese worker in Klang Valley.

"The agent is not very good. My friend who didn't get paid, went and talked to her. Then my friend was beaten and also dismissed from her job." Female Burmese worker in Klang Valley.

Forced labor has been defined by the International Labor Organization (ILO) as work for which a person has not offered him or herself voluntarily and which is performed under the menace of a penalty applied by an employer or a third party. Victims of forced labor are involuntarily trapped or coerced in their jobs.

"Involuntariness" can involve deception about the nature of the work, forced overtime, limited freedom of movement and communication, degrading living conditions or no freedom to resign in accordance with legal requirements. "Coercion" or the menace of penalty can include sexual or physical violence, threats against family members, food or sleep deprivation, withholding of wages, confiscation of identity papers or travel documents, and so on.

The Verite study found that forced labor is widespread in Malaysia's electronics industry which employs hundreds of thousands of foreign migrant workers, who are mainly women.

The electronics sector is a key driver of Malaysia's economy, accounting for one-third of exports. It produces mainly semiconductors, computer peripherals, and consumer electronics.

Malaysia has now become a major global manufacturing hub for the electronics industry. Some 87% of investment in the industry comes from foreign sources, principally multinational companies from the US, Japan, Europe, Taiwan and Korea. They usually operate in free industrial zones which offer many benefits like duty free import if raw materials, tax breaks, advanced infrastructure, and IT. These zones are also very light on regulation.

Recruitment fees, which most foreign workers paid, often exceeded legal limits. These workers usually had to borrow money to pay these fees, thereby putting them and their families in a situation of vulnerability.

One in five workers in the study were deceived about their wages, hours, overtime requirements or pay, provisions regarding termination of employment, or the nature or degree of difficulty or danger of their jobs. These workers had little ability to change or refuse their jobs upon arrival.

Virtually all foreign workers interviewed reported that their passports were held by their employer or their broker/agent, something which is against the law in Malaysia. Most reported that it was impossible or difficult to get their passports back when they wanted or needed them. This means these workers are unable to move around freely and safely.

Many foreign workers experienced appalling living conditions. Foreign workers are in a state of virtual bondage, as they are tied to their employers and jobs through their work permits, which require the sponsorship of a particular employer. Almost half reported experiencing harassment from immigration officials, police or volunteer citizen security corps -- often times they were subject to financial extortion from these groups.

Many electronics workers in Malaysia are now employed directly by third-party employment agents, rather than the company owning their factory. These labor intermediaries manage manage the full employment life cycle of recruitment, hiring, deployment, management and repatriation on behalf of client companies. These workers were found to be more vulnerable to forced labor conditions than directly hired workers.

The Malaysian government has the aspiration to climb the global value chain, and break out of its "middle income trap". It is striving to move its semiconductor industry beyond basic operations such as assembly, testing and packaging to higher-value added activities.

But the competitiveness of the industry is derived from low labor wages, rather than high skills, thanks to cheap migrant labor. Indeed, Malaysia is a leading destination for foreign migrant laborers in Southeast Asia. Estimates range upwards from 4 million (25-30% of Malaysia's total work force), with half coming from Indonesia and many undocumented.

Malaysia will never achieve its ambition of reaching high income status whilst ever it bases it development strategy on low-wage, low-skilled factory jobs performed by foreign workers.

Please don't think that this Verite report is a one-off anomaly. Many other reports on Malaysia's treatment of migrants have come up with similar conclusions, reports by the ILO, International Trade Union Confederation, the UN, and Amnesty International.

Another of the very many examples of migrants' rights abuses in Asia is that of the exploitation and forced labor of migrant agricultural workers in South Korea, as reported by Amnesty International.

Listen to the voice of NT, a 35 year old woman from Cambodia, who was working at a fruit and vegetable farm in South Jeolia province.

"I was supposed to have a day off every other Saturday. But from April to June I worked every day without rest from 3am to 7pm. Otherwise rest days were given arbitrarily by the boss, who didn't want me to be free on Saturdays, because he didn't want me befriending other Cambodians. He was probably afraid that others would find out about my long work hours."

Migrant workers under the Employment Permit System (EPS) make up a substantial proportion of the agricultural workforce in Korea. Their labor is important to the survival of farms throughout the country. Despite this, a significant number of employers exploit migrant agricultural workers who endure excessive working hours, underpayment, discrimination and poor living conditions. Many are also denied a weekly paid rest day and annual leave.

Amnesty's report reveals how the majority of migrants interviewed were trafficked for exploitation and were working in conditions of forced labor. Most were coerced into working under conditions to which they did not agree, most commonly through threats and violence. Amnesty also highlights shortcomings in the redress mechanisms, finding that many people who sought help from the authorities were actively discouraged from taking complaints forward.

Consequently, many unscrupulous employers have been allowed to exploit migrant agricultural workers with virtual impunity. Until the rights of these migrants are protected in practice, the EPS will continue to be synonymous with a system of labor exploitation.

Amnesty's findings are supported by evidence compiled by the National Human Rights Commission of Korea. Concerns about the treatment of migrants under Korea's EPS have also been raised by a number of UN bodies, but the Korean government has consistently failed to implement their recommendations.

Korea has not ratified a number of relevant international conventions, namely: the UN Protocol to Prevent, Suppress and Punish Trafficking in Persons, Especially Women and Children; and the ILO Conventions on Forced or Compulsory Labour, and Abolition of Forced Labour.

Migrants have to struggle to survive in all countries, including in North America and Europe where they can also be subject to human rights abuses. But the evidence shows that where migrants are given a chance they can make great contributions to the local economy. And where they are treated decently, they can also become good citizens.

- Forced labor in the production of electronics goods in Malaysia: a comprehensive study of scope and characteristics. Verite.