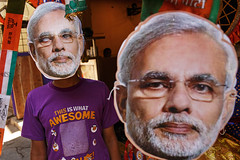 Why India must retain talent to grow by Asit K Biswas and Kris Hartley.
India continues to assert its image in the global technology community. During Prime Minister Narendra Modi’s visit to Silicon Valley last month, issues like social media and entrepreneurship were popular talking points. “Our startups represent not just commercial success stories, but are powerful examples of social innovation,” Modi had boasted at an event in San Jose. Tech CEOs praised him for the ‘Digital India’ campaign that would appear to have the country poised for innovative greatness.

Less sanguine observers, however, have raised concerns about the loss of Indian talent to the West. India does not lack talent. Many of the country’s peripatetic expats have been highly successful. The boardrooms of Silicon Valley and Wall Street are full of Indian success stories.

Upward mobility is not enjoyed only by a handful of Indian corporate superstars. The average income of Indian-American families, at $88,000 annually, is the highest among all ethnic subgroups.

Visa is the Master Card

One might assume that a country producing such successful talent would itself enjoy elite educational status. However, politics and bureaucratic meddling have compromised the quality of once-elite educational institutions like the IITs and IIMs. Bright young Indians have fled in part because India’s corporate and research environment failed to value and compensate them for their talents.

Between 2000 and 2014, more than 61,000 high-income Indian families emigrated in search of better opportunities and quality education for their children. In a Gallup survey published in 2012, 10 million Indians expressed a desire to move to the US.

IIT may be a victim of its own success, with the government duplicating the university in almost every state (14 new ones since 1990). The once formidable IIT brand has been rubber-stamped on what could be called ‘provincial universities’. Reservations for staff and students in these new schools have gradually eroded the quality of education. The pool of teaching talent has been stretched thin with the proliferation of new positions, nearly a third of which sit vacant. That figure rises to 40% when counting all Indian universities.

Loose standards and the absence of controls and benchmarks have diluted the quality of PhD dissertations. The global reputation of Indian universities lags behind China, never mind the West. The US, with its massive demand for higher education and historically supportive policies and resources, has only a handful of truly elite technological institutions: such as MIT, Caltech, Georgia Tech, and departments in flagship universities like UC Berkeley and the University of Michigan. Competition for admission to these is fierce. By contrast, the glut of IITs has recently led to deadline extensions for filling seats, a harbinger of competitive disadvantage.

Predictably, CEOs are complaining that Indian graduates lack functional skills. A 2011 survey revealed that finding qualified employees was a challenge for 70% of Indian companies. A 2011 Wall Street Journal piece found that “75% of technical graduates and more than 85% of general graduates are unemployable by India’s high-growth global industries”. Lack of English comprehension and basic vocational skills are often cited as the explanation.

And yet, Modi claims that India is still the world’s ‘back office’, even as the Philippines surpasses India to become the largest call centre. British and American firms have even repatriated their call centres. Personnel costs may be higher, but efficiency gains have apparently made this strategy worthwhile. India is losing its techno-economic competitive edge, and has been doing so for years.

Make in India, then Export

India needs to create 12 million new jobs each year for decades to come. The emigration of India’s promising young workers leaves a vacuum of talent that the remaining population cannot fill.

Modi’s ‘Make in India’ campaign has netted splashy headlines, and indeed there is some progress. India recently improved its ranking by 16 places year-on-year in the World Economic Forum’s Global Competitiveness Report. With rapid advancements in technology in the coming decades, India will lose some job types, but also see millions of new ones that do not currently exist. Sadly, there does not appear to be any genuine attempt to reform university education and vocational training to meet the vast skill shortages of the future.

India needs a culture of innovation, future-oriented planning, public and private sector risk-taking, and massive infrastructure improvements to fertilise the growth of high paying jobs — jobs that peer countries are eager to poach. Unfortunately, these conditions are largely absent.

The weight of an unwieldy bureaucracy, the re-emergent scourge of ‘tax terrorism’, policy uncertainty eroding FDI confidence, erratic revisions of regulations, and the overall absence of meaningful reform will continue to hamper innovation and job-creation. Unless these fundamental conditions improve, India’s best talent will continue to be found in its airport departure lounges.

People now have higher expectations for living standards, particularly for their children. Modi’s visit to Silicon Valley is evidence that the government is committed to building the country’s global image. However, India first must sell its value as a country to its own citizens. Currently, it is failing to close that sale.

The writers are with the Lee Kuan Yew School of Public Policy, National University of Singapore.

This article was originally published on October 23, 2015.