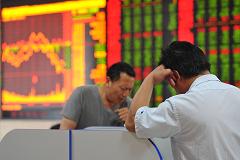 “There should be no circuit breaker for policy reform”, write Asit K. Biswas and Kris Hartley.
Chinese stock markets are reeling from instability. “Circuit breakers” halted trading activity after steep losses, angering investors and embarrassing government regulators. Jilted traders played cards in public trading halls while anxiety swirled in global markets. In a country where the two major stock exchanges are less than 30 years old, volatility is no surprise. However, it raises deeper concerns about the mobility of China’s middle class investors and their role in the country’s longer-term development.

Since the mid-20th century, the developing world has watched Western households build their wealth through property and stocks. China’s economic growth is now enabling new generations of consumers to do the same. However, their investment options are comparably less attractive. The Chinese stock market is immature by Western standards and suffers from a lack of policy clarity, while uncertainty about property rights and market instability has sent Chinese housing investors scurrying to foreign markets. The path to middle class wealth is proving to be more global (and treacherous) in China than it once was in the United States.

Both countries have progressed through the standard stages of national development. America’s postindustrial economic story has even been applied to similar predictions about China. This comparison is particularly tempting with growth in higher value-added industries and the development of a middle class – often seen as a building block of any country’s domestic economic stability. However, there are important differences. What once made the American middle class financially stable – independently functioning markets and institutional stability – seems absent in China.

The postwar economic boom in the United States, one of the longest growth periods in modern history, was first the product of a stable and well-paid manufacturing workforce. With property investment then serving as a vehicle for wealth accumulation, the middle class built net worth, educated its children, and prepared for a comfortable retirement. Notably, much of this transformative economic mobility came from high-skill blue collar jobs.

By now, the rest of the story is well known and copiously analyzed. In the past 40 years, the American manufacturing base eroded, “gutting” the middle class. The living-wage maker economy morphed into a low-wage service economy, with financial gains accruing increasingly to the globally-invested super-rich. While an aging boomer generation sat atop its nest egg, its daughters and sons – dutifully collecting university degrees – flooded the domestic job market with high skills and higher expectations. Underemployment and unemployment became common among young graduates, and as the boomer generation shrank the middle class base was not maintained at replacement rate.

The Pew Research Center, a non-partisan think tank based in Washington D.C., recently released a report about the plight of the middle class in the United States. The study finds that the middle class now constitutes less than 50 percent of the country’s population. Along with the impacts of de-industrialization on employment, the “financialization” of the economy is also to blame. Through a variety of high-profile foibles, the finance industry in its voracious appetite gambled with personal savings, pension funds and mortgages, and lost big. The result was the most damaging economic crisis in nearly a century, with gains from the “recovery” benefitting mostly the wealthy.

Much of China’s middle class is now expanding in the same way America’s did in the 1950s and 1960s – through skilled manufacturing employment. As disposable household income grows, the stock market is seen as one vehicle for ambitious strivers to trade their way even further up the middle class ladder. This is where the development paths of China and the United States split. In mid-20th century America, there were few severe economic shock events – stock market crashes or property collapses – that threatened the stability of the middle class. The stock market had its usual fluctuations (often around energy prices) but the storage of wealth in property – which until 2008 appeared to be a safe strategy – helped the American middle class maintain stability.

In contrast to America’s postwar boom years, highly speculative and jittery investment is now flooding an unstable stock trading market in China. Momentary gains generate the appearance of success during bull markets, and exuberance reigns. However, frequent and unexpected downturns are wiping out large portions of this wealth, acutely impacting small investors who are not as well cushioned or diversified as institutional investors. These small investors constitute a majority of trades.

What the middle class does with the proceeds of wage growth will determine its stability. In China, will the financialization of the economy and the pursuit of quick gains overshadow steady, long-term wealth strategies? Will the aspirational middle class indulge in manic spending binges and skittish sell-offs, or will it observe more patience? If the latter, do Chinese markets provide the security to be patient?

The accessibility of wealth-building tools is a critical component to generating middle class stability. Chinese investors at a certain income level have the means to buy property abroad. Indeed, China accounts for the second highest level of investment in American property by foreign nationals after Canada, with Chinese investors spending $28 billion in 2014. One lure is that investors perceive American property as permanently held, while property in China affords ownership claims only to improvements (structures) rather than land. China’s middle and lower middle class do not have the option to invest globally, and are therefore captive to unstable domestic property and stock markets. This has a regressive effect whereby the tools of upward mobility are monopolized by the already-wealthy, driving small investors to more creative and even bizarre measures – as with the latest wave of investment in “short” internet domain names.

The other side of the investment coin is consumption. A 2010 Brookings Institution report argues that Chinese citizens should spend more to boost domestic consumption. This will likely be facilitated by burgeoning e-commerce, which brings consumption opportunities to China’s vast interior markets and is expected to account for 42 percent of China’s total consumption growth by 2020. China’s economy is also expected to be powered by the upper middle class, helping drive 9 percent consumption growth even under low GDP growth scenarios. These projections are built on the assumption of a rising generation of educated, tech-savvy, luxury-hungry consumers.

Do the middle classes of China and America resemble passing ships? The 50 percent threshold for America’s middle class seems to be an arbitrary number. The decline is decades underway and may be as precipitous in the 21st century. The only thing significant or constructive about the 50 percent statistic is the policy attention it could generate. Despite political pandering to the middle class by both major parties, there is little hope for much policy attention given the track record of the past few decades.

A thriving middle class does not depend solely on wage growth. There must be opportunities to compound household savings into wealth. The experience of the United States in the 20th century is evidence, despite recent and discouraging setbacks. In China, predictable policy and stable institutions are crucial for supporting the functioning of markets, whether in stocks or property. If the Chinese middle class lives up to its promise of bolstering the country’s next stage of economic growth, it must have fair access to the same types of stable wealth-building tools that Americans once enjoyed. China has the luxury of learning from the United States’ policies and revising them to confront new global economic challenges and satisfy local political expectations. There should be no circuit breaker for policy reform.

This article was first published by The Diplomat on February 6, 2016.