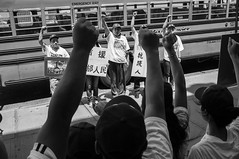 China could well become the "epicenter of global labor unrest", writes John West.
China's rapid economic development these past three decades was propelled by a migration of "surplus labor" from the countryside to factories in China’s coastal cities. The growing demand for this surplus labor did not initially lead to wage increases due to the enormity of China's surplus labor.

But then, as labor shortages appeared, Chinese wages began to increase sharply from 2003. Some analysts thus concluded that China had reached the "Lewis turning point" (based on the analysis of Nobel-prize winning economist, W. Arthur Lewis). This means that, with the exhaustion of the supplies of cheap surplus labor, development would henceforth need to be driven by human capital, technology and productivity.

This period of labor shortages also saw a rise in labor unrest, especially in 2010 when there was a spate of suicides at Foxconn, the company that assembled your iPhone. Workers resorted to strikes to obtain wage increases, as there were neither the institutions for collective wage bargaining nor trade unions to represent them (the official All-China Federation of Trade Unions is merely a stooge of the Communist Party, which typically supports management).

In addition to labor shortages, other factors driving labor unrest were the high cost of living in China's coastal regions, a desire for better working conditions, and a growing "rights consciousness" of the new generation of Chinese workers.

More recently, in the past couple of years, the Chinese economy has entered a big growth slowdown, with growing numbers of factory closures, layoffs, restructurings, relocations, and pay cuts. This reflects the weak global economy, the waning of the earlier Chinese policy stimulus, and the shifting of export production by some companies to lower cost countries like Vietnam, Cambodia and Bangladesh. China has now become a high-cost country, the victim of its own success.

There have been cases of workers returning from holidays only to find their factories closed. The number of Hong Kong-owned factories in southern Guangdong province fell by one-third from 2006 to 2013. And factory employment in China has fallen continuously over the past two years. In addition to manufacturing, the construction sector is the most affected by labor unrest.

These new developments have provoked a much bigger wave of labor unrest. According to the China Labor Bulletin, a Hong Kong-based advocacy group, there were more than 2700 strikes and protests in 2015, more than double the previous year (the real figure is bound to be much higher). Labor unrest can take many forms, such as strikes, suicide threats, holding corporate executives hostage, and threatening to reveal a company's dirty laundry. Such unrest has also been facilitated by social media and grass-roots activist groups.

The main factors driving this new wave of labor unrest are unpaid wages, severance payments, and other benefits like pension contributions. The fact that some local governments habitually fail to enforce labor laws doesn't help.

In addition, younger workers have higher expectations and are no longer willing to tolerate the abuse and exploitation their parents had to endure. While older workers, who have little hope of another job, are among the most militant. High profile industrial disasters, like the 2015 explosion at a Tianjin chemicals warehouse, are also motivating labor unrest.

In the face of this labor unrest, the Chinese government is caught between the devil and the deep-blue sea. It has been pressuring companies to pay workers unpaid salaries and other benefits. It has also been offering financial assistance to companies to retain workers.

But it has also fearful of labor unrest turning against the government, in the context of more general social unrest. It has thus been clamping down aggressively on protesting workers, imprisoning activist groups, and dismantling grass-roots labor rights groups.

An appalling example in March 2015 was the case of a group of eight construction workers who were arrested for staging a protest over unpaid wages in the city of Langzhong in Sichuan province. They were found guilty of "obstructing official business", and sentenced to six to eight months in jail, with the court holding a public sentencing to humiliate them. The employers who did not pay their wages got off scot-free.

Today’s labor unrest highlights the fragile state of China’s social contract. The Chinese public accepted the Communist Party’s monopoly on political power because it has guaranteed economic growth and full employment. So today’s labor unrest, and social instability more generally, is spooking the Chinese Communist Party (CCP), as it clings to power.

The CCP has every reason to be spooked. Labor unrest could increase further in China in the coming years, as the country needs massive restructuring of its economy to return the economy to a high-growth path. Inefficient, debt-ridden “zombie” state-owned enterprises need to be brought to heel, which will require massive layoffs (up to 6 million according to some estimates) As will the shift from a manufacturing-export colossus towards to modern service-oriented economy. Quite obviously factory workers cannot be transformed into management consultants overnight.

It is not surprising that the government is now becoming cautious about the necessary restructuring of zombie companies, since it will lead to structural unemployment. At the same time, delaying these necessary reforms would also compromise further growth prospects.

How the Chinese government manages the labor unrest in the years ahead may well determine the survival of the Communist regime. Its current knee-jerk reaction towards repression is not the most effective way. It needs to let steam out of the social pressure cooker. It should also bolster social security nets, rather than increasing its public security budget for even more repression.