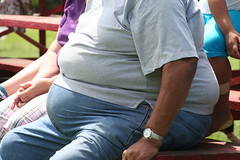 Extra body weight has long been associated with wealth, as evident from Renaissance art to stereotypes of modern American consumers. However, according to the CIA World Factbook (and World Health Organisation data), the top-20 most obese countries are concentrated in the South Pacific, Middle East and Latin America.

In developing and middle-income countries, obesity is accompanying increased urbanisation, posing unforeseen threats to public health and testing the policy resolve and fiscal capacity of governments.

In 2014, the Overseas Development Institute estimated that of the world's 1.46 billion obese people, 904 million (62 per cent) live in developing countries. References in the United Nations' Sustainable Development Goals of "improved nutrition" and "non-communicable diseases" are implicitly applicable to obesity, but progress is doubtful without genuine policy action in developing countries that have typically emphasised only economic growth.

Asia is uniquely vulnerable, particularly as rural-to-urban migration continues. As the world's most rapidly urbanising region, Asia is projected to be 64 per cent urban by 2050. While concern focuses primarily on mega-cities like Jakarta and Manila, rapid urbanisation is also occurring in secondary cities less prepared to manage it. Poverty and widespread deprivation will likely lead to public health challenges in these cities.

Increased consumption of processed and convenience food, in particular by low-income migrants, is contributing to a rising incidence of obesity. For example, between 1961 and 2009, global consumption of sugar and sweeteners rose by 20 per cent; both are linked with obesity. At the individual level, the resulting health complications include diabetes, high blood pressure, heart disease, cancer, breathing disorders and even lost memory.

Sugar in soft drinks and juices is a particularly common but overlooked culprit. Hence, some developed countries are adopting policy measures to address the hazards of sugar consumption, as are a handful of developing countries.

For example, India is considering a 40 per cent tax on soda, and a similar tax in Mexico was found to have decreased soda purchases by 12 per cent. However, such initiatives are isolated, and there appears to be scant political will or even personal initiative to address the issue in most developing-country cities. City dwellers have access to a wider variety of unhealthy convenience foods and snacks than their rural counterparts, making obesity an increasingly urban-based challenge lost amid celebrations of national gross domestic product growth.

Furthermore, sedentary lifestyles - behaviours that are arguably beyond the reach of policy - are compounding the negative impacts of unhealthy eating. For example, kids in cities may exercise less in favour of homebound entertainment like computer games, social media and movies - particularly as the pathologies of urban pollution (air, environment, et cetera) discourage outdoor activity. Such choices are typical of urban lifestyles even in the West, where passive entertainment and the technology to experience it are more widely available than in rural areas.

Beyond threats to individual well-being, obesity-related complications compromise the financial stability of health systems, accounting for an increasing share of health costs (21 per cent in the United States, according to a 2012 study). Indeed, higher costs are only a Western or developed world phenomenon.

A 2010 study found that in China, home to an estimated 92 million diabetes sufferers, obesity accounted for 3.7 per cent of medical costs in 2003. In the intervening 13 years, higher incomes, urbanisation and the popularity of Western fast food have likely raised that percentage. In addition to the fiscal uncertainty of addressing this unforeseen health crisis, the wider costs of obesity to the overall economy include lost work time and higher insurance costs for employers.

Like American "baby boomers" recently generating a demand spike for elderly services, Asia's urban newcomers who become obese may surprise urban governments with an array of health problems over the next several decades. Will these governments recognise this threat now, or pass it off to future leaders?

Policy headwinds are not attributable to weak political will alone. Healthy food initiatives shrink markets for certain products, upsetting food and beverage companies. Awareness about the negative health impacts of sugary drinks in the United States has eroded demand, compelling soda manufacturers to pursue markets in developing countries. According to a Coca-Cola executive, "there're 600 million teenagers who have not had a Coke in the last week". This thinking is good for profits but bad for public health. Governments cannot afford to ignore the gathering crisis of obesity, and must choose whose welfare to serve - corporations or citizens.

Public health should join congestion, pollution and overcrowding on the urban policy agenda. National food regulations - which exist already for additives and preparation conditions - can also be used to elicit a healthier range of consumer options. City governments should complement these efforts, first by ensuring that poor neighbourhoods enjoy access to healthy eating options (for example, fresh food markets and urban farming), and second by enacting local taxes on unhealthy products.

The latter can shape healthy habits, partially offset the fiscal burden of obesity-related health crises, and send an important message that public health is not solely a national-level policy issue. Western countries provide cautionary tales about the long-term effects of poor nutrition, and many are now hastily scrambling to address an already bloated crisis. Asian cities have an opportunity to shape a healthier future, but the time to act is now.

Asit K. Biswas is Distinguished Visiting Professor at the Lee Kuan Yew School of Public Policy, National University of Singapore. Kris Hartley is a doctoral candidate at the same school.

This article was first published in the Straits Times on 12 April, 2016.
Tags: asia, obesity