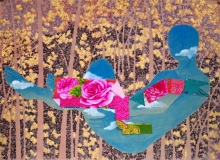 Ethnic painting from Vietnam in Toronto

Vietnam is widely considered to be the latest "Asian tiger economy", with very rapid economic development and poverty reduction. But much of the benefits have accrued to the dominant Kinh (Viet) ethnic group which make up 86% of the population, and the small the Hoa community (ethnic Chinese in Vietnam).

The country's ethnic minorities, of which there are over 50 distinct groups including the Muong, still lag seriously behind. These ethnic minorities often suffer from lack of access to education and health services, and land rights and human rights abuses.

It is thus a double miracle that Tham Poong, as a woman from the Muong ethnic minority, should be one of Vietnam's most successful contemporary artists. She has had 17 international exhibitions over the past 15 years including shows in Berlin, New York City, London, Miami, Tokyo, Helsinki and Manila.

In this exhibition, Tham Poong uses vivid images, striking contrasts and intricate patterns to bring to life her strong connection to her roots. Her poetic watercolours on handmade ‘Dzo’ paper are almost surreal, erasing boundaries between humans and nature.

"In my mind everything has two halves. Everything contains each other, is intertwined with each other. What makes me happy are the customs of the minority people who I grew up with, their spirituality and musicality, the sounds and smells of nature", she says. "I am now living in a big city but these memories and experiences have a special place inside me. Through my paintings I express my love and admiration for the close connectedness that minority people, in their beautifully patterned clothes, have with nature".

The owners of the East Gallery, Andrew FitzGerald and Claudia Blume, have known Tham Poong for 16 years. She designed their wedding invitation in 1998.

This exhibition is a celebration which should not be missed!