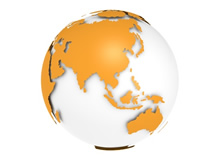 Discussions in the Asia-Pacific focus substantially on the region's economic development...
Thankfully, the OECD's excellent publication "Society at a Glance: Asia/Pacific 2011" provides us with some much needed information on social development.

Let's start at the top and work down.

First, life expectancy. Asia has the world's highest life expectancies, with Japan, Hong Kong, Australia, Singapore, Macao and Korea being at 80 years or above. Then there is a jump down to the mid-70s for Malaysia, Vietnam, Sri Lanka and China. ASEAN's populous countries of the Philippines, Indonesia and Thailand are around 70. Jump down to 64 years and you will find India, a little below its neighbors of Pakistan and Bangladesh, and also Laos. Burma and Cambodia bring up the rear at 61.

Let's now turn to health spending. For the advanced economies, it ranges from $1,800 a person per year for Singapore to $3,400 for Australia, with Japan, New Zealand and Korea in between. If you're a citizen of one of the emerging countries, just don't get sick. Health spending drops to $600 for Malaysia, $300 for Thailand and on way down to Bangladesh at $47!

A similar story emerges for social spending (labor market programs, social insurance, social assistance and child protection). Japan, New Zealand and Australia are in the 16-18% of GDP range, while most countries are below the region average of 5.2%. Basically the same story goes for pension coverage.

What about average years of schooling? New Zealand, Australia, Korea and Japan are just below the OECD average of 12.7 years. Economies like Hong Kong, Malaysia, Singapore, the Philippines, Sri Lanka, Mongolia and China are in the 8-10 year range. Thailand is at 7.5 years just below the region's average of 8.2 years. Schooling the falls away with Indonesia at 6.2 years, India at 5.1 years and Nepal coming in last at 4.0 years. A broadly similar picture emerges for early childhood education.

The real population drama is Asia's lost women, as reflected in the high numbers of males per 100 females aged 0-4 years. China has 122 males per 100 females, while India has 109, Hong Kong 108, Korea 108 and Singapore 107, compared with a regional average of 106 and an OECD average of 105. This is the product of a strong preference for males leading to sex-selective abortion, females infanticide or the unequal allocatioon of health care and food towards males. Infant mortality is tragically high in the cases of Pakistan, Cambodia, Burma, India and Laos.

Despite Asia's dramatic reduction in poverty, some countries still have extremely high poverty rates. Bangladesh, Nepal, Timor-Leste, Laos and India all have around 80% of their populations living on less than $2 a day. Then there is a long list with around 50% of their populations living below the $2 mark -- Indonesia, Mongolia, Vietnam and the Philippines -- while even China still has 36% below $2.

When it comes to income inequality, most of the Asia-Pacific countries surveyed have higher rates of inequality than the OECD average, with the worst cases being Indonesia, India, Hong Kong, Singapore and China.

Cambodia, Nepal and India only have about 30% of their populations with "improved sanitation" (that is, a toilet), while Mongolia, Indonesia, Laos, Bangladesh and China are all in the 50-55% range. It is a similar situation for the population with improved water.

Suicides are tragically high for Kazakhstan, Sri Lanka, Laos, Korea, Japan, India and China. Even Burma and North Korea have suicide rates below the OECD average, while the happy-go-lucky Philippines has one of the lowest.

Life satisfaction is lower in the Asia-Pacific than for OECD countries. The happiest Asians are in Thailand, Singapore, Japan, Korea, and Indonesia, while the least happy are in Cambodia, Sri Lanka, Mongolia and China.

What to make of all of this?

While it is difficult to come up with some simple conclusions amidst all this information, it seems clear that Asia's performance in economic growth has been much stronger than its social development. Governments have a lot of work to do translate economic growth into societal well-being.