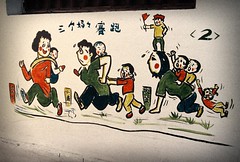 But closer scrutiny suggests that effect of the policy on China's fertility rate may only have been modest, despite the associated horrors of the policy. And that the benefits of a two-child policy may also be modest.

The Chinese government should abolish its inhuman restrictions on the reproductive freedom, as well as its dastardly family planning agency. At the same time, it should make more serious efforts to tackle China's demographic abyss.

How did China get itself into this "demographic pickle"?

China's great leader Deng Xiaoping is revered for his role in opening the Chinese economy to the world. But under his watch, the Chinese government also did some appalling things, like the Tiananmen Square massacre and implementing China's infamous one-child policy.

Population has long been an issue in China. Chairman Mao once famously said "The more people there are, the stronger we are”.

But Deng and his experts thought differently, even though China's fertility rate had already fallen from 5.8 children per woman in 1970 to 2.8 in 1980 thanks to softer efforts to encourage fewer births. So 1980, they implemented China's infamous one-child policy.

The one-child policy was never implemented uniformly across the nation. Single women are still not allowed to have a child outside of wedlock. Against that, many people have long been allowed to have two children, such as ethnic minorities like the Tibetans and Uighurs, rural residents whose first child was a girl, and couples where both parents are only children. This means that the strongest population growth has occurred among groups with the worst access to education and health services -- not a good sign for China’s economic future.

In short, the one-child policy has mainly applied to urban dwellers, about 40% of the population ("one and half child policy"). But even here there were always inequities. Families who violated the one-child policy law were subject to fines (“social maintenance fees”), which the wealthy could usually afford to pay despite their arbitrary method of calculation.

These monies are supposed to cover the cost of social services for the additional children. But the evidence shows that this is not the case. They go straight into the coffers of local governments and are very useful source of finance. It is also reported that some of the fines end up in the pockets of officials from the vast and powerful family planning bureaucracy which has offices in every city, town and village.

There are no fines in the case of multiple births like twins or triplets. Predictably, some women reportedly undergo fertility treatments to obtain such multiple births.

Another way around the system has been "birth tourism" whereby pregnant Chinese women travel to Hong Kong or the US (Saipan is the closest US territory to China, and Chinese citizens do not require a visa to travel there). Offshore births do not count in the one-child policy "quota", when they acquire an overseas nationality, something which is much coveted by China's elite which has severe doubts about the future of their great country.

Since poor people cannot afford to pay fines or travel overseas to give birth, they are all too often subject to horrendous forced abortions, sterilisation, contraception, and other draconian acts by the family planning agency. According to one estimate, there have been 336 million abortions, 196 million sterilizations, and 403 million intrauterine devices inserted since 1971 in China.

There are also many stories of "hidden children" (some 13 million were recorded as lacking birth registration in the 2010 census), transferring excess children to childless couples, infanticide, and about 100, 000 adoptions by Western families. The Ministry administering the one-child policy behaves like a spy and police organisation, with a system of paid informants, “womb police”.

Government employees can lose their job, and be subject to other harassment, if they violate the one-child policy. Human rights lawyers who defend victims of the one-child policy suffer abuses, the most prominent case being the blind lawyer, Chen Guangcheng, who escaped prison to the US.

As Nobel-prize winning economist Amartya Sen has argued, China's fertility rate would likely have continued its downward trend in tandem with economic development, urbanization, and education. Most other East Asian countries have lower fertility rates than China’s 1.7 children per woman -- even Thailand’s is lower rate at 1.4. Even if China's one-child policy was once effective, that is unlikely to still be the case. It is not surprising that recent policy easing has seen little impact on fertility, notably the case of the 2013 decision to allow couples of which one was an only-child to have two children.

Most analysts argue that the one-child policy is also responsible for the country’s unbalanced sex ratio of births, as one-child families choose the gender of their child thanks to methods from ultrasound to “gendercide”. Indeed in 2014, there were 116.8 boys aged 0-14 years in China for every 100 girls.

As it happens, most Asian countries seem to practice gender selection for their children reflecting Confucian and patriarchal preferences. For example, in India there were 111.1 boys for every 100 girls, in Vietnam 108.8, Pakistan 108.3, Korea 107.2, and Hong Kong 107.1. While China is the worst case for child gender bias, the one-child policy may be only one factor, as it is the only Asian country to have a one-child policy.

Asia’s unbalanced sex ratio means that many young men will be unable to find wives. China could have shortage 30 million young women in 2020. The corresponding 30 million ‘bare branches’ (surplus men) could well become a further source of social instability, especially in rural areas given the greater propensity of young women to migrate to cities. The woman-deficit has stimulated “marriage migration” from poorer countries like the Philippines and Vietnam, but this only reallocates the gender deficit from one country to another.

There has also been much discussion of the other social implications of the one-child policy. First, there is the “little emperor syndrome” of spoilt one-child brats. Researchers Lisa Cameron, Nisvan Erkal, Lata Gangadharan, and Xin Meng have found that little emperors to be “significantly less trusting, less trustworthy, more risk-averse, less competitive, more pessimistic, and less conscientious individuals” than previous generations.

The Chinese government's decision to transform its one-child policy into a two-child policy is a positive step. But it is a case of too little/too late.

Chinese women will still have unfair restrictions on their reproductive freedom. China's dastardly family planning agency will still have too much power over Chinese citizens. And this modest change will not do much to reverse China's demographic abyss. Too much damage has already been done, and China now suffers from a shortage of young people.

For one, there is the powerful family-planning bureaucracy which employs 500,000 full-time and 6 million part-time workers. It collects over $3 billion in fines each year, with over $300 billion collected since 1980. This agency fears a loss of power and job cuts if family planning were abolished. Importantly, the government is not abolishing family planning, and couples will need to make bureaucratic application to have a second child. There is thus fear that many of the horrors of the one-child policy will continue.

China is in desperate need of sensible population policies. Its demographic destiny is not good. The fertility rate is low. Its labor force is already falling. The population is aging at a rapid rate. And it would also take two decades for any uptick in fertility to reach the economy. China’s demographics may be the single most important threat to the nation’s future

As in the case of other East Asian countries, China needs to do undertake widespread reforms, not just family planning, to address its demographic challenges. This should include raising the retirement age, implementing deep structural reforms to lift productivity, and contemplating immigration. Moreover, it is necessary to reform government policy, business practices, and social customs to enable women to combine a fulfilling career with a happy family life.
Tags: china, china's one-child policy, china's demographics, little emperors, china's two-child policy